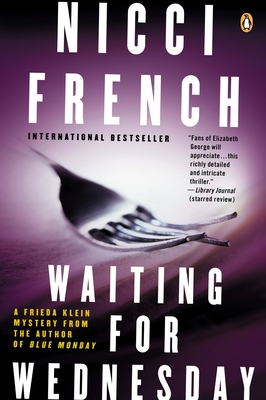 In the third volume of the bestselling Frieda Klein Mystery series, the brilliant but troubled London psychotherapist returns—only to journey into a darkness from which there may be no return.

Ruth Lennox, mother of three, is found dead in a pool of her own blood. Detective Chief Inspector Karlsson calls Frieda, hoping she can offer a new angle. But when it emerges that Ruth was leading a secret life, her family closes ranks. Still reeling from a recent attempt on her life, Frieda starts down a dangerous path that seems to lead to a serial killer who has long escaped detection. Is she getting closer to unraveling either case? Or is Frieda just the victim of her own paranoid, fragile mind?

Praise For Waiting for Wednesday: A Frieda Klein Mystery…

Praise for WAITING FOR WEDNESDAY:

"There’s enough backstory for this third Frieda Klein mystery to stand alone, but the greatest pleasure is in following the series from the beginning to see the evolution of Klein, a detective of the mind, who endures a rough patch here but makes it through the darkness. Another
compelling entry in this complex, suspenseful series."—Booklist (Starred review)

"Demanding the reader’s full attention, this richly detailed and intricate thriller weaves the story of Frieda’s life, past and present, into a compelling and suspenseful story. Fans of Elizabeth George will appreciate French’s attention to subtlety and detail."—Library Journal (Starred review)

“As a protagonist, Frieda Klein breaks all the rules.... Grounding Klein’s complicated character is the authors’ sublime prose. The Thames is so real we can smell its stink; the dark city streets so vividly evoked we can see steam rising off the pavement after a rain. This is top-notch writing, sensual, deep, and wise.”—Mystery Scene

"Not only is the plot of this story intricately woven by this husband and wife team of writers, but the ending is one that will leave you gasping for breath!"—Suspense Magazine

“Another fabulous installment... Husband and wife Nicci Gerard and Sean French excel at creating rich and complicated characters... Plus the series just keeps getting better and better!”—No More Grumpy Bookseller

"Tuesday’s Gone is one of those great, great books in the mystery genre wherein the more you know, the less you know—peel back one stratum and you cannot shovel fast enough to get into the next, which reveals anything but what you expected. French takes the novel on a number of unexpected twists and turns, not the least of which relates back to Blue Monday, which, as it turns out, didn’t quite end on its last page."
—Bookreporter.com

“A superb psychological thriller . . . With its brooding atmosphere, sustained suspense, last-minute plot twist, and memorable cast of characters, this series debut will leave readers eager to discover what color Tuesday will be.”
—Publishers Weekly, starred review

Nicci French is the pseudonym for the internationally bestselling writing partnership of suspense writers Nicci Gerrard and Sean French. The duo has sold more than eight million copies of their books worldwide. They are married and live in Suffolk and London, England.
Loading...
or support indie stores by buying on
(This book is on backorder)