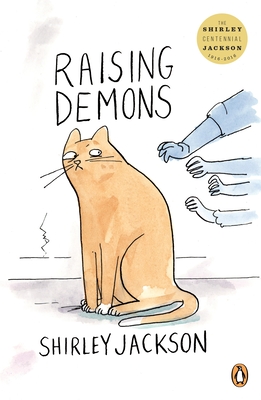 In the uproarious sequel to Life Among the Savages, the author of The Haunting of Hill House confronts the most vexing demons yet: her children

In the long out-of-print sequel to Life Among the Savages, Jackson’s four children have grown from savages into full-fledged demons. After bursting the seams of their first house, Jackson’s clan moves into a larger home. Of course, the chaos simply moves with them. A confrontation with the IRS, Little League, trumpet lessons, and enough clutter to bury her alive—Jackson spins them all into an indelible reminder that every bit as thrilling as a murderous family in a haunted house is a happy family in a new home.

“Hilarious, subversive, sharp without being legal, and loving without an ounce of sentiment, Shirley Jackson’s more-or-less autobiographical account of life as a mother of four and faculty wife (and brilliant writer) is an eternal, comic joy.”
-Amy Bloom

"Jackson isn’t all eerie uncertainties and lonely housewives. Those who know her work only from “The Lottery” or Hill House may be surprised to discover that she could also be very funny...Jackson’s two lighthearted memoirs, are filled with droll observations and amusing mishaps."
–William Brennan, Slate

“A very pleasant form of pandemonium and hugely entertaining.”
-Kirkus

SHIRLEY JACKSON (1916–1965) first rose to fame with her short story “The Lottery.” Her six novels and many short stories confirmed her as an essential voice in twentieth century American fiction.
Loading...
or support indie stores by buying on