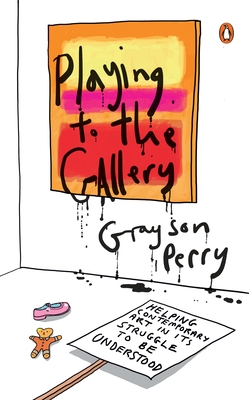 Playing to the Gallery

Helping Contemporary Art in Its Struggle to Be Understood

Now Grayson Perry is a fully paid-up member of the art establishment, he wants to show that any of us can appreciate art (after all, there is a reason he’s called this book Playing to the Gallery and not Sucking Up to the Academic Elite). This funny, personal journey through the art world answers the basic questions that might occur to us in an art gallery but that we’re too embarrassed to ask. Questions such as: What is “good” or “bad” art—and does it even matter? Is art still capable of shocking us or have we seen it all before? And what happens if you place a piece of art in a rubbish dump?

Praise For Playing to the Gallery: Helping Contemporary Art in Its Struggle to Be Understood…

Praise for Playing to the Gallery

“[Grayson Perry] deftly analyzes a lot of subtle, sophisticated issues in a clear and readable fashion, throwing in many fascinating observations and anecdotes along the way.”—The New York Times

“Perry’s sharp wit and artistic acumen combine for a delightful tour through the issues facing contemporary art world in this series of essays… He displays considerable insight into the state of mainstream art, focusing on basic ideas of taste and democratic appeal…Perry’s fun and wonderful book is a necessary addition to a world that must continue to ask difficult questions of art.”—Publishers Weekly (Starred review)

“Well read but not pretentious, skeptical but not cynical, this book will have anyone interested in (or puzzled by) contemporary art laughing as they ponder major issues that define how we think about and experience art.”—Library Journal (Starred review)

“Hugely entertaining...delightfully non-elitist...[Playing to the Gallery is] a thing of pleasure: petite, luxuriously printed, a mischievous little hymn to 21st-century inclusivity.”—The Times (UK)

“Full of thought-provoking ideas that make you want to pause on every page and say: ‘Discuss.’ I have never read such a stimulating short guide to art. It should be issued as a set text in every school.”—The Sunday Times (UK)

“Acute and funny at the same time....[Playing to the Gallery has a] conversational tone and lively intelligence.”—The Telegraph

GRAYSON PERRY's first art prize was a large papier-mâché head he awarded to himself as part of a performance art project at college in 1980. Since then he has won many other awards, including the Turner Prize in 2003. He is now one of Britain's most celebrated artists and has had major solo exhibitions all over the world. His 2013 BBC Reith Lectures were the most popular lectures since the series began. He won a BAFTA for his Channel 4 documentary on the creation of six new tapestries entitled 'The Vanity of Small Differences, All in the Best Possible Taste', for which he was also awarded Best Presenter at the Grierson British Documentary Awards.