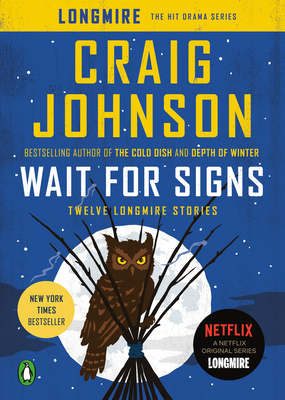 Craig Johnson's The Highwayman and An Obvious Fact are now available from Viking.

Ten years ago, Craig Johnson wrote his first short story, the Hillerman Award–winning “Old Indian Trick.” This was one of the earliest appearances of the sheriff who would go on to star in Johnson’s bestselling, award-winning novels and the hit television series Longmire, now streaming on Netflix. Each Christmas Eve thereafter, fans rejoiced when Johnson sent out a new short story featuring an episode in Walt’s life that doesn’t appear in the novels; over the years, many have asked why they can’t buy the stories in book form.

Wait for Signs gives Longmire fans a chance to own these beloved stories—and one that was published for the first time in the Viking edition—in a single volume. With glimpses of Walt’s past from the incident in “Ministerial Aide,” when the sheriff is mistaken for a deity, to the hilarious “Messenger,” where the majority of the action takes place in a Porta-Potty, Wait for Signs is a necessary addition to any Longmire fan’s shelf and a wonderful way to introduce new readers to the fictional world of Absaroka County, Wyoming.

Craig Johnson is the New York Times bestselling author of the Longmire mysteries, the basis for the hit Netflix original series Longmire. He is the recipient of the Western Writers of America Spur Award for fiction, the Mountains and Plains Booksellers Award for fiction, the Nouvel Observateur Prix du Roman Noir, and the Prix SNCF du Polar. His novella Spirit of Steamboat was the first One Book Wyoming selection. He lives in Ucross, Wyoming, population twenty-five.

“Filled with classic Longmire wit and wisdom. Readers will once again find themselves transported to Walt’s world in Absaroka County, Wyoming, a world filled with lovable characters…[and] snappy, sharp dialogue….The modern era has given us a term called ‘binge watching’ where fans of a show will watch multiple episodes back to back. For fans of Johnson's Longmire books, Wait for Signs is the opportunity to binge. However, with stories this well-written some may find themselves wanting to hold back on the binging and save some for later... Whether or not you are a longtime fan of the Walt Longmire series, or this is your first taste of the fictional world Johnson has created, these stories will not disappoint.”
—Deseret News

“Johnson pens a series that should become a must-read, so curl up, get comfortable, and enjoy the ride.”
—The Denver Post

"Each story reveals... the tenderness and compassion, as well as the melancholy, that is Walt Longmire. . . . the finely developed characters and top-notch writing... left me wishing for more."
—Wyoming Tribune

“This story collection featuring the ironic Wyoming sheriff is a must. . . . [Walt Longmire is] one of the most memorable characters is crime fiction today.”
—Publishers Weekly

“Heartwarming . . . Sample, savor, and save these [short stories] for special occasions.”
—Booklist

“Like the greatest crime novelists, Johnson is a student of human nature. Walt Longmire is strong but fallible, a man whose devil-may-care stoicism masks a heightened sensitivity to the horrors he’s witnessed. Unlike traditional genre novelists who obsess mainly over every hairpin plot turn, Johnson’s books are also preoccupied with the mystery of his characters’ psyches.”—Los Angeles Times

“Johnson knows the territory, both fictive and geographical, and tells us about it in prose that crackles.”—Robert B. Parker

“The characters talk straight from the hip and the Wyoming landscape is its own kind of eloquence.”—The New York Times

“[Walt Longmire] is an easy man to like…Johnson evokes the rugged landscape with reverential prose, lending a heady atmosphere to his story.”—The Philadelphia Inquirer

“A winning piece of work…There’s a convincing feel to the whole package: a sense that you’re viewing this territory through the eyes of someone who knows it as adoring lover and skeptical onlooker at the same time.”—The Washington Post

“Johnson’s pacing is tight and his dialogue snaps.”—Entertainment Weekly