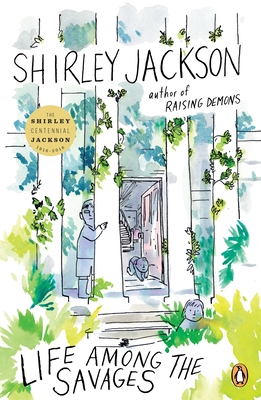 Life Among the Savages

In a hilariously charming domestic memoir, America’s celebrated master of terror turns to a different kind of fright: raising children.

In her celebrated fiction, Shirley Jackson explored the darkness lurking beneath the surface of small-town America. But in Life Among the Savages, she takes on the lighter side of small-town life. In this witty and warm memoir of her family’s life in rural Vermont, she delightfully exposes a domestic side in cheerful contrast to her quietly terrifying fiction. With a novelist’s gift for character, an unfailing maternal instinct, and her signature humor, Jackson turns everyday family experiences into brilliant adventures.

Praise For Life Among the Savages…

"Many who profess an admiration for Shirley Jackson, often described as a 'writer's writer' do not usually include her thinly veiled memoirs of motherhood. But it is precisely these hilariously eviscerating, keenly observed, and genersou books that I and many other writers who happen to be mothers, adore.
-Ayelet Waldman

"As warm as it is hilarious and believable...Never has the state of domestic chaos been so perfectly illuminated."
–New York Times Book Review

"Jackson artfully loves and portrays her children. She writes of their fast growth into formidable personalities with dismayed narration and lovely direct quotes, all charmingly subjective. Her view of their sayings and doings is certainly sophisticated but far from cynical or objective."
–Saturday Review

"Jackson isn’t all eerie uncertainties and lonely housewives. Those who know her work only from 'The Lottery' or Hill House may be surprised to discover that she could also be very funny...Jackson’s two lighthearted memoirs, are filled with droll observations and amusing mishaps."
–William Brennan, Slate

Shirley Jackson (1919–1965), a celebrated writer of horror, wrote many stories as well as six novels and two works of nonfiction.
Loading...
or support indie stores by buying on