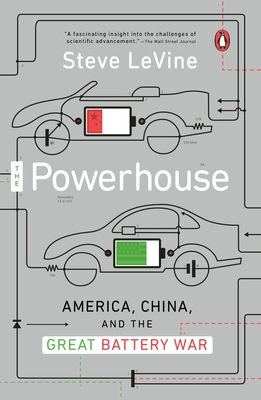 A Soul of a New Machine for our time—a gripping account of invention, commerce, and duplicity in the age of technology

A worldwide race is on to perfect the next engine of economic growth, the advanced lithium-ion battery. It will power the electric car, relieve global warming, and catapult the winner into a new era of economic and political mastery. Can the United States win?

Steve LeVine was granted unprecedented access to a secure federal laboratory outside Chicago, where a group of geniuses is trying to solve this next monumental task of physics and engineering. But these scientists—almost all foreign born—are not alone. With so much at stake, researchers in Japan, South Korea, and China are in the same pursuit. The drama intensifies when a Silicon Valley start-up licenses the federal laboratory’s signature invention with the aim of a blockbuster sale to the world’s biggest carmakers. The Powerhouse is a real-time, two-year account of big invention, big commercialization, and big deception. It exposes the layers of aspiration and disappointment, competition and ambition behind this great turning point in the history of technology.

Praise For The Powerhouse: America, China, and the Great Battery War…

“Mr. LeVine provides a fascinating insight into the challenges of scientific advancement, especially the difficulty of translating victories in the lab to the demands of the mass market.... Mr. LeVine has written something like a thriller.... An important story with world-wide implications.”—Wall Street Journal

“With the pace... of a thriller, [LeVine]... reveals how the very human foibles of scientists and entrepreneurs, as well as fundamental physics and chemistry, stand in the way of such efforts, which, if successful, could result in a new global industry and attendant jobs.”—Scientific American

“LeVine [has] a penchant for dissecting the science side of the energy industry.”—Andrew C. Revkin, New York Times’s Dot Earth Blog

“‘Powerhouse’ shows readers how a scientific insight can work its way slowly into the marketplace, to the point where it becomes ubiquitous. The book is also packed with the kind of strange, unexpected history that makes good science writing so memorable.”—San Francisco Chronicle

“LeVine, who spent two years inside Argonne’s battery-research unit, captures the sense of growing urgency and competitive drive among [a] sheltered and sometimes bickering group of tinkerers.... LeVine also provides the authoritative take on the rise and fall—and perhaps the coming resurrection—of Envia, which has licensed Argonne’s battery technology in pursuit of its big but not-fully-baked ambitions.”—Washington Post

“Journalist LeVine (The Oil and the Glory) offers an inside look at the race among industrialized nations to develop a world-changing battery technology. The story’s intensity is bolstered by the high stakes…But LeVine wisely stays focused on the competition as it unfolds, luring readers into the drama with clear explanations of the American players involved in both the public and private sectors.”—Publishers Weekly

“LeVine is a masterful story teller and Powerhouse is a thrilling read about an innovator’s quest to transform our planet and our lives. His goal, a revolutionary battery, has the potential to change everything.” —Peter H. Diamandis, chairman of the X-Prize Foundation and author of Abundance: The Future is Better Than You Think

“Steve LeVine has written a fast-paced, engaging account of one of this young century’s great quests: the search for a technology that will unleash a dramatic transformation of the world with blockbuster new industries and culture-changing products. It’s an amazing story, gripping in its surprising narrative and crowded with fascinating characters.” —Marcus Brauchli, former Executive Editor, The Washington Post, and former Managing Editor, The Wall Street Journal

“Gripping and mind-opening. Filled with astonishing research, The Powerhouse reads like a thriller. It’s fabulous.” —Amy Chua, Yale Law professor and author of Battle Hymn of the Tiger Mother and The Triple Package

Steve LeVine is the Washington correspondent for Quartz, where he writes about the geopolitics of energy and technology. He is a Future Tense fellow at the New America Foundation and teaches energy security at Georgetown University’s School of Foreign Service, where he is an adjunct professor. He is the author of The Oil and the Glory and Putin’s Labyrinth.
Loading...
or
Not Currently Available for Direct Purchase