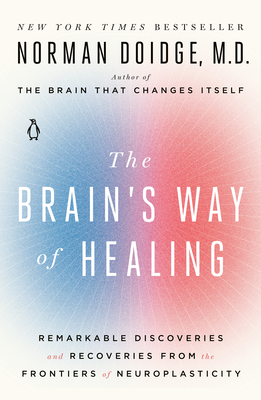 The Brain's Way of Healing

Remarkable Discoveries and Recoveries from the Frontiers of Neuroplasticity

The New York Times–bestselling author of The Brain That Changes Itself presents astounding advances in the treatment of brain injury and illness. Now in an updated and expanded paperback edition.

Winner of the 2015 Gold Nautilus Book Award in Science & Cosmology

In his groundbreaking work The Brain That Changes Itself, Norman Doidge introduced readers to neuroplasticity—the brain’s ability to change its own structure and function in response to activity and mental experience. Now his revolutionary new book shows how the amazing process of neuroplastic healing really works. The Brain’s Way of Healing describes natural, noninvasive avenues into the brain provided by the energy around us—in light, sound, vibration, and movement—that can awaken the brain’s own healing capacities without producing unpleasant side effects. Doidge explores cases where patients alleviated chronic pain; recovered from debilitating strokes, brain injuries, and learning disorders; overcame attention deficit and learning disorders; and found relief from symptoms of autism, multiple sclerosis, Parkinson’s disease, and cerebral palsy. And we learn how to vastly reduce the risk of dementia, with simple approaches anyone can use.

For centuries it was believed that the brain’s complexity prevented recovery from damage or disease. The Brain’s Way of Healing shows that this very sophistication is the source of a unique kind of healing. As he did so lucidly in The Brain That Changes Itself, Doidge uses stories to present cutting-edge science with practical real-world applications, and principles that everyone can apply to improve their brain’s performance and health.

Praise For The Brain's Way of Healing: Remarkable Discoveries and Recoveries from the Frontiers of Neuroplasticity…

Praise for The Brain’s Way of Healing

“Brilliant and highly original. Neurology used to be considered a depressing discipline with patients often displaying fascinating but essentially untreatable symptoms and disabilities. Drawing on the last three decades of research, Doidge challenges this view, using vivid portraits of patients and their physicians. The book is a treasure trove of the author’s own deep insights and a clear bright light of optimism shines through every page.”
—V. S. Ramachandran, MD, PhD, neurologist, neuroscientist, and author of The Tell-Tale Brain (W. W. Norton, 2011), Director, UCSD Center for Brain and Cognition

"With unassuming respect for all he observes, Doidge profiles the pioneers and practitioners of neuroplastic therapy and healing…. Each extraordinary story features an extraordinary doctor with their own extraordinary experience…. Doidge’s passion for healing might be expected, given his own medical training as a psychiatrist and psychoanalyst but, as he says, “the true marvel is...the way that the brain has evolved, with sophisticated neuroplastic abilities and a mind that can direct its own unique restorative process of growth”. You can read a lot about it in this book."
—Lancet Neurology

“A tour de force. In one of the most riveting books on the human brain and its mystery powers ever written, Doidge addresses the role of alternative medical therapies to reset and re-sync the dynamic patterns of ‘energy in our brain, whit the ability to restore relatively normal health to those whose fate seems hopeless. . . . These are people that traditional medicine all but abandoned as . . . untreatable. But they were rescued. . . . It’s possible to start anywhere in the book and be mesmerized.”
—Huffington Post

“An exciting overview of powerful new neuroscience theories that connect mind, body, and soul . . . In this age of distraction and unnatural environments and actions—like staring at screens all day—brain science offers all kinds of useful techniques to care for our infinitely complex selves. Norman Doidge’s work is a Michelin Guide to this hopeful new trove of knowledge and insight.”
—Boston Globe, USA

“Stunning . . . The Brain’s Way of Healing is another groundbreaking book by Norman Doidge.  His style keeps you going into the deep dark secrets of how the brain works. . . . [H]is reframing of remarkable treatments that I had categorized as gimmicky left me fascinated and humbled. He brings a whole new level of insight into the body, brain, mind connection that will impact any reader.”
— John J. Ratey, MD, Clinical Associate Professor of Psychiatry, Harvard Medical School and author of Driven to Distraction

“Bold, remarkable . . . paradigm challenging. The Brain’s Way of Healing is brilliantly organized, scientifically documented, and a beautifully written narrative that captivates the reader, who is left with the profound message that the brain, similar to other organs, can heal.”
—Stephen W. Porges, PhD, Indiana University Bloomington and author of The Polyvagal Theory

“Doidge’s book is filled with compelling stories about the power of ingenious technologies and disciplined awareness methods generated by innovators who transcended their own brain challenges, and who now use them to help others make radical improvements in conditions often deemed hopeless. It points to a future of remarkable and unprecedented brain healing.”
—Martha Herbert, MD, PhD, Neurologist, Harvard Medical School, and Massachusetts General Hospital, author of The Autism Revolution

“The Brain’s way of Healing is a stunner—the sort of book you want to read several times, not because it is difficult to understand, but because it opens up so many novel and startling avenues into our potential to heal. Norman Doidge enthralls us with a rich combination of lucidly explained brain research and pioneering new (and some not so new, but not widely known) approaches to recovery. With an eloquence reminiscent of Oliver Sacks, Doidge bolsters the latest advances in brain science with a series of extraordinary case histories of people for whom all hope seemed to be lost, but who healed as a result of great personal courage, and by changing the ways their bodies and brains processed sensations and movement. This hopeful book demonstrates that a variety of sensory inputs—light, sound, electricity, vibration, movement, and thought—can awaken the brain’s attention processors, and thereby allow even the most afflicted to (re)gain ownership of their lives.
—Bessel van der Kolk MD, Medical Director, the Trauma Center, Brookline MA; Professor of Psychiatry, Boston University School of Medicine; Author of The Body keeps the Score: Mind, Brain and Body in the healing of Trauma

“The book offers real hope to individuals suffering from diverse chronic conditions. It shows in terms of graphic personal stories that we truly do not yet know the limits of what is possible in rehabilitation. The book also has a number of creative integrations of the data that will be of interest to neuroscientists.”
—Edward Taub, Ph.D., Behavioral Neuroscientist, University Professor,University of Alabama at Birmingham, Director, UAB CI Therapy Research Group and Taub Training Clinic

“Everyone who has a brain could benefit from reading Doidge’s book.”
—The Columbus Dispatch

“A vivid, robust and optimistic read . . . an essential addition to our growing understanding of the mind-brain-body connection. Doidge argues quite convincingly that when the brain is damaged or incompletely formed, whether from stroke, multiple sclerosis, traumatic brain injury, autism, ADHD or a host of other conditions, it’s entirely possible to “rewire” the circuits by training a different part of the brain to take over the task. . . . He's positively elegant in his crystalline explanations of brain science for a lay audience.”
—Toronto Star, Canada

“This is a book of miracles: an absorbing compendium of unlikely recoveries from physical and mental ailments offers evidence that the brain can heal. Fascinating . . . brings to mind Oliver Sacks.”
—Guardian

“Dazzling . . . In friendly vignettes reminiscent of Oliver Sacks’s case studies, Doidge chronicles the heroic efforts of patients with a wide variety of apparently intractable ailments, from chronic pain to multiple sclerosis. . . . Each of Doidge’s examples suggests tangible treatment ideas for patients who may have thought they were out of options. Doidge’s penchant for considering unconventional approaches to healing offers hope for all.”
—Bookpage, USA

“Beautifully written . . . inspiring . . . merging scientific information into timeless and fascinating personal stories . . . The Brain's Way of Healing grabs onto the reader at once and compels them to keep reading. This is an important and encouraging book.”
—The Vancouver Sun, Canada

“Exhilarating science . . . In an era of ever-increasing medicalisation of the human mind, and the medication of it, the appeal of neuroplasticity outlined by Doidge is addictive. It is inspiring, page-turning stuff.”
—Sunday Times, London

“A fascinating study on brain science that shows the way to major therapeutic discoveries.”
—Library Journal

Norman Doidge, M.D., is a psychiatrist, a psychoanalyst, and the New York Times bestselling author of The Brain That Changes Itself, which was chosen by the Dana Foundation from over thirty thousand titles as the best general book on the brain. It has sold over a million copies around the world. He was on the Research Faculty of the Center for Psychoanalytic Training and Research at Columbia University’s Department of Psychiatry in New York City, and on the faculty of the University of Toronto’s Department of Psychiatry for thirty years. He lives in Toronto.