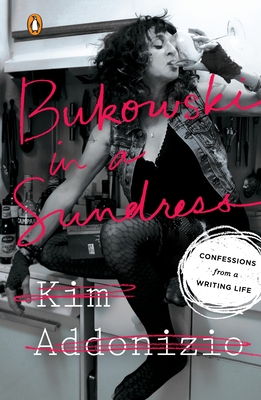 Bukowski in a Sundress

Confessions from a Writing Life

“Somewhere between Jo Ann Beard’s The Boys of My Youth and Amy Schumer’s stand-up exists Kim Addonizio’s style of storytelling . . . at once biting and vulnerable, nostalgic without ever veering off into sentimentality.” —Refinery29

A dazzling, edgy, laugh-out-loud memoir from the award-winning poet and novelist that reflects on writing, drinking, dating, and more

Kim Addonizio is used to being exposed. As a writer of provocative poems and stories, she has encountered success along with snark: one critic dismissed her as “Charles Bukowski in a sundress.” (“Why not Walt Whitman in a sparkly tutu?” she muses.) Now, in this utterly original memoir in essays, she opens up to chronicle the joys and indignities in the life of a writer wandering through middle age.

Addonizio vividly captures moments of inspiration at the writing desk (or bed) and adventures on the road—from a champagne-and-vodka-fueled one-night stand at a writing conference to sparsely attended readings at remote Midwestern colleges. Her crackling, unfiltered wit brings colorful life to pieces like “What Writers Do All Day,” “How to Fall for a Younger Man,” and “Necrophilia” (that is, sexual attraction to men who are dead inside). And she turns a tender yet still comic eye to her family: her father, who sparked her love of poetry; her mother, a former tennis champion who struggled through Parkinson’s at the end of her life; and her daughter, who at a young age chanced upon some erotica she had written for Penthouse.

At once intimate and outrageous, Addonizio’s memoir radiates all the wit and heartbreak and ever-sexy grittiness that her fans have come to love—and that new readers will not soon forget.

Praise For Bukowski in a Sundress: Confessions from a Writing Life…

“In poet Kim Addonizio’s unflinching, often hilarious ‘confessions,’ the excesses and debauchery are not prelude but process, not a state from which to be saved but a series of experiences and memories to save, and savor. In this memoir-in-essays, Addonizio wields a sharp eye and a sharper pen. . . . Much as it revels in the poet’s life as a fun-loving bad girl, this stunning book is at its most gorgeous when it reveals its author’s great big heart.”
—The Boston Globe

“Addictively compelling . . . One expects a lot from a memoirist whose remarkable life is her art and whose remarkable art is her life, and Bukowski in a Sundress does not disappoint. Addonizio’s acerbic commentary on the business of writing is equally poignant and hilarious. . . . If there is any justice at all in the literary world (a premise Addonizio might dispute), Bukowski in a Sundress will reach the wide-ranging audience its brave, brilliant author deserves.”
—Chicago Tribune

“A poet and writer with decades of accolades, Addonizio . . . comes across as the outsider-insider, wine-swilling but clear-eyed. . . . Accessible and unpretentious, sexy and funny, boastful and vulnerable, she’s the girlfriend who’s willing to dish, whether about ‘How to Try to Stop Drinking So Much’ or ‘How to Succeed in Po Biz,’ which ends, beautifully, with the command: ‘Don’t be such a goddamned little baby.’ This is a woman who, no matter the costume, you want to hear.”
—The Village Voice

“Whether she’s sharing deep family secrets, divulging poetry advice to scared undergraduates, or kissing and telling after a boozy one-night stand at a writers’ conference, Addonizio’s newest venture gifts us with laughter as well as heartache, sometimes—like life—all at the same time. . . . Her voice is fearless, honest, and cannot be mistaken for anyone else’s. This memoir is a must-read.”
—Arizona Daily Sun

“Addonizio’s essays provide an honest depiction of one woman’s struggle against the banalities, degradations, and disappointments of everyday life while attempting to make art, offering implicit guidance for readers embarking on their own creative pursuits and a voyeuristic opportunity for those curious about what the ‘writing life’ might entail. . . . They chip away at the mysteries and assumed glamour of artistic production, generously providing insight into the experiences that both fuel and inhibit creation.”
—Interview

“Bukowski in a Sundress tracks the peripatetic life of an American literary writer in the early 00s. . . . Addonizio, who writes free verse in poetry and something rather close to that in prose, has long been praised for the precision of her language. She has an ear for crisp, unforgettable phrases.”
—The Guardian

“Somewhere between Jo Ann Beard’s The Boys of My Youth and Amy Schumer’s stand-up exists Kim Addonizio’s style of storytelling: In her prose as in her poetry, she is at once biting and vulnerable, nostalgic without ever veering off into sentimentality, and delightfully contradictory in every way . . . creating a nuanced collage of what it means to be a female writer in the 20th century and beyond.”
—Refinery29

“An emotional ride, full of honesty and humor.”
—Bustle

“If a Venn diagram of Nora Ephron’s nonfiction fans and Amy Schumer’s fans was created I think the overlapping fans would appreciate Kim Addonizio’s humor, wit, snark, and frankness. Nothing seems off the table as Addonizio discusses sex, relationships (familial and romantic), her mother’s illness, writing, and the story behind the title.”
—Book Riot

“Kim Addonizio’s work has been consistently funny, formally inventive, sexually positive, philosophically complex, and lyrically tight despite its chatty surface. . . . Her new memoir is about drankin’, druggin’, fuckin’, writin’, and her relationships with her parents. What else is there?”
—The Stranger

“Here is a book to judge by its cover. Feel a shiver of happy anticipation, followed by relief: Bukowski in a Sundress  isn’t a shimmery summer beach read. This memoir-in-essays is an unflinching look at middle age, men, ailing parents, alcohol, and the enduring commitment to serious writing. . . . Books like this can save us. Even if you don’t need saving, Bukowski In a Sundress will make life look a whole lot better.”
—PopMatters

“In a world of air-brushed gurus peddling desire maps and better living through conscious capitalism, Kim Addonizio’s distinct blend of frank personal reckoning and hard-won insight is refreshing. In short, Addonizio is my kind of flawed, imperfect creative teacher. . . . At moments, she’s a saint. At others, she’s a mess. But through it all, she’s paying attention, keeping a sense of humor, and writing it all down.”
—KQED Arts

“It takes bravery to be as honest, and as tart, as Addonizio is, even in the face of the reproach that comes when you tell the whole truth instead of pretending. This kind of writing flies in the face of our societal preference for curated Instagram feeds and selective Facebook posts. . . . She sheds elegant light on her encounters with language, the meaning of poetry, and what it really means to be a writer. She’s privileged to be able to lead a creative existence, yes. But don’t say she hasn’t paid the price. We’re just as privileged, as readers, to be trusted with her confessions, which are designed to make us feel but also to teach us something.”
—Toronto Star

“Addonizio is brash and tender, pissed off and funny, well armored and wounded. Emotions, bravado, and empathy run high in her award-garnering poetry and novels, and she now taps into the wellsprings of her creativity in this rollicking and wrenching memoir-in-essays. . . . Always vital, clever, and seductive, Addonizio, a secular Anne Lamott, a spiritual aunt to Lena Dunham, delivers shock and awe, humor and pathos with panache.”
—Booklist

“Filled with Addonizio’s usual jaunty wit, sarcasm, and irreverence. This ‘Emily Dickinson with a strap-on,’ as she calls herself, is ruthlessly honest and writes so well that whatever she's excoriating or dissing or musing about becomes immediately fascinating. . . . An unrelenting, authentic, literary midnight confession.”
—Kirkus Reviews

"This is Addonizio in a nutshell: funny, frank, vulgar, and just a little bit vulnerable. . . . Her writing is charmingly self-aware, at times confessional (a descriptor she likens to being tarred and feathered), but never apologetic. She wears her sexual misadventures, her drinking habits, and her anxieties over abandonment and failure like a badge, if not of honor, then of identity.”
—Publishers Weekly

“It would be easy to compare Kim Addonizio’s memoir with the writings of Anne Lamott or the humor of Amy Schumer, but that would not do justice to her quirky, irreverent, incredibly funny writing. In these short essays about her personal and writing life, Addonizio takes aim primarily at herself. She brings humor to middle age, life as a writer with a certain level of achievement, her drinking and drug use, many one-night stands, her marriages that have failed and falling in love with a younger man. . . . Yet, unlike many memoirists who cover similar topics, she writes with a tone and attitude that leaves the reader wanting just a tiny bit more, kind of like the vodka and lemonade she’s fond of imbibing.”
—Shelf Awareness

Kim Addonizio is an award-winning author of fiction, essays, and poetry. She has received numerous honors for her work, including the John Ciardi Lifetime Achievement Award and fellowships from the Guggenheim Foundation and the National Endowment for the Arts. Her poetry collection Tell Me was a finalist for the National Book Award, and she has won Pushcart Prizes for both poetry and prose. She is also the author of two popular writing guides for poets, The Poet’s Companion and Ordinary Genius, and teaches and performs internationally. She divides her time between New York City and the Bay Area.
Loading...
or support indie stores by buying on
(This book is on backorder)