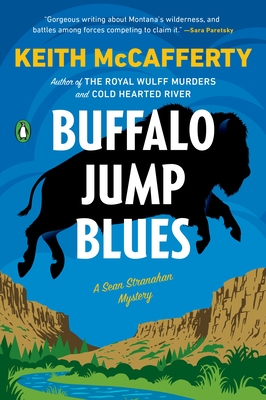 A Novel (A Sean Stranahan Mystery #5)

In the fifth novel in the Sean Stranahan mystery series, Montana's favorite fly fisherman-detective tackles a case of lost love, murder, and wildlife politics. Cold Hearted River, the sixth in the series, is now available.

In the wake of Fourth of July fireworks in Montana’s Madison Valley, Hyalite County sheriff Martha Ettinger and Deputy Sheriff Harold Little Feather investigate a horrific scene at the Palisades cliffs, where a herd of bison have fallen to their deaths. Victims of blind panic caused by the pyrotechnics, or a ritualistic hunting practice dating back thousands of years? The person who would know is beyond asking, an Indian man found dead among the bison, his leg pierced by an arrow.

Farther up the valley, fly fisherman, painter, and sometime private detective Sean Stranahan has been hired by the beautiful Ida Evening Star, a Chippewa Cree woman who moonlights as a mermaid at the Trout Tails Bar & Grill, to find her old flame, John Running Boy. The cases seem unrelated—until Sean’s search leads him right to the brink of the buffalo jump. With unforgettable characters and written with Spur Award Winner Keith McCafferty's signature grace and wry humor, Buffalo Jump Blues weaves a gripping tale of murder, wildlife politics, and lost love.

“McCafferty’s wryly bantering characters are irresistible, his humor tangy, and his lyricism potent as he matches escalating action with intriguing disquisition…A sharply ironic and suspenseful tale surreptitiously veined with profound insights into love, friendship, cultural collisions, and dire conflicts over wildlife and land, the sacred and the profitable.”—Booklist (starred)

“Explosive, gripping and not to be missed.  Keith McCafferty gets the West just right with its cast of individualistic characters, stunning backdrops and a past that breaks through in violent and unexpected ways.  Buffalo Jump Blues is an impressive crime novel, and McCafferty is an impressive writer.”
—Margaret Coel, New York Times bestselling author of The Man Who Fell From the Sky and Winter’s Child

“Gorgeous writing about Montana’s wilderness, and battles among the forces competing to claim it.”Critical Mass

“Keith McCafferty understands that there is much more to a riveting mystery than what is commonly found in the typical whodunit. He also knows that a rousing good tale can often shine a light on important matters that deserve our attention. In Buffalo Jump Blues, McCafferty does that and more as he takes us into the heart of Big Sky Country, a place he knows and loves, and treats us to a tightly crafted tale packed with quirky, captivating characters -- mostly good, some just plain mean, and several who are simply murderous – and weaves an adventure that leaves you wanting more. He writes with heart and command of the story that sparkles on every page.”
—Michael McGarrity, New York Times bestselling author of Backlands

“Buffalo Jump Blues is an evocative portrayal of the West, as rugged as it is fragile, and the centuries-old conflicts that still haunt the land and the people.  McCafferty nails the delicate balance between humor and heft in a genuine way as he skillfully weaves together history and a present day mystery through an eclectic, endearing cast of characters.  You will be thinking about this book long after you read the last page.”—P.J. Tracy, New York Times bestselling author of Off the Grid

“McCafferty has written one of the best books of the year. He’s a great plot spinner, a master of pacing, and has a wonderful ear for dialogue. A must read.”—Andrew Gulli, editor at The Strand Magazine

“McCafferty has an ear and eye for character, language, history, politics and murder, all of which come together in this strikingly original novel, which plays the past and present conflicts of American Indian life with and against a very contemporary story of identity, corruption and murder that grabs the reader on the first page and never lets go.”—Jonathan Santlofer, bestselling author of The Death Artist

Keith McCafferty is the survival and outdoor skills editor of Field & Stream, and the author of The Royal Wulff Murders, The Gray Ghost Murders, Dead Man’s Fancy, and Crazy Mountain Kiss, which won the 2016 Spur Award for Best Western Contemporary Novel. Winner of the Traver Award for angling literature, he is a two-time National Magazine awards finalist. He lives with his wife in Bozeman, Montana.

Keith encourages you to visit him at keithmccafferty.com
Loading...
or support indie stores by buying on
(This book is on backorder)