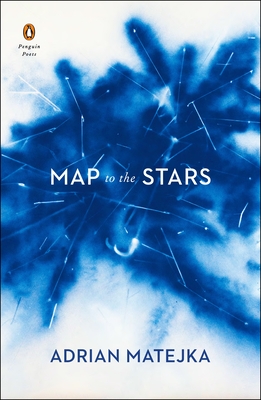 Map to the Stars (Penguin Poets)

A resonant new collection of poetry from Adrian Matejka, author of The Big Smoke, a finalist for The Pulitzer Prize and the National Book Award

Map to the Stars, the fourth poetry collection from National Book Award and Pulitzer Prize finalist Adrian Matejka, navigates the tensions between race, geography, and poverty in America during the Reagan Era. In the time of space shuttles and the Strategic Defense Initiative, outer space is the only place equality seems possible, even as the stars serve to both guide and obscure the earthly complexities of masculinity and migration. In Matejka's poems, hope is the link between the convoluted realities of being poor and the inspiring possibilities of transcendence and escape—whether it comes from Star Trek, the dream of being one of the first black astronauts, or Sun Ra's cosmic jazz.

Praise For Map to the Stars (Penguin Poets)…

“Matejka offers a fresh set of figures for describing the youth of Black Americans now entering middle age. . .There is truly an astounding wealth of material here, cultural artifacts that add up to an ironclad allegory for the plight of urban African Americans in the ‘80s, which serves to point the way to where we are now.”
– The Los Angeles Times

“Map to the Stars unpacks human systems like race, poverty and parenting. But it also examines larger ones – like the system of gravity and momentum.  ‘The things,’ Matejka says, ‘that make the universe spin.’”
– PBS Newshour

“Covers an ever-expanding emotional landscape . . . and continues Matjejka’s investigation of race in the private and public spheres.”
– St. Louis Post-Dispatch

“In this seismic and sonic new Matejka collection Richard Pryor is an Indiana sun god and a Black boy waits impatiently for the solar system to alight inside his mailbox. Rich and ekphrastic, this journey of boy-to-man ascendance cradles the might and memoir of motherships and other two-legged planets that lift our chins to starlight then break us in two.”
--Nikky Finney

“Fueled by powdered milk, boom box tracks and Star Trek reruns, A Map to the Stars charts a poetic bildungsroman as well as a redemptive journey through music searching for ‘a little city of gleaming/ gallantry.’ These are mouth-watering poems full of ‘tough-guy shufflebucks’ and motherships ‘gorgeous as comets,’ a ‘vernacular hubbub’ that hurtles through our ‘violently Technicolor heliosphere’—and beyond. For a rocket-powered poet like Adrian Matejka, where else to aim but the stars?”
--Campbell McGrath

“Matejka’s fourth book is a coming-of-age collage set in Reagan-era Indianapolis, a series of intimate verbal snapshots of African American youth and family life. The speaker of these poems is caught between lonesome artifacts of the past . . . and hopeful, strange, and complicated glimpses of possible futures . . . Matejka swirls these seemingly disparate parts into a stunningly coherent vision of life in the 1980s, growing up poor and black and full of energy and longing.”
– Craig Morgan Teicher, npr.org

Adrian Matejka's most recent collection of poetry is Somebody Else Sold the World. His other books are Map to the Stars; The Big Smoke, which was the winner of the Anisfield-Wolf Book Award and a finalist for both the National Book Award and Pulitzer Prize; Mixology, which was selected for the National Poetry Series; and The Devil's Garden (Alice James Books, 2003), winner of the New York / New England Award. Among Matejka's other honors are fellowships from the Academy of American Poets, the Guggenheim Foundation, the Lannan Foundation, the National Endowment for the Arts, and United States Artists. He served as Poet Laureate of the state of Indiana in 2018-19 and lives in Indianapolis, Indiana.
Loading...
or
Not Currently Available for Direct Purchase