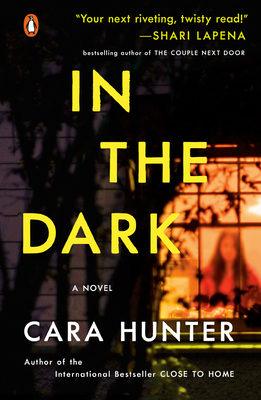 From internationally bestselling author Cara Hunter, a riveting suspense novel about the shocking secrets revealed when a woman is discovered held captive behind a basement wall—and no one is who they appear to be

Do you know what they’re hiding in the house next door?

A woman and child are found locked in a basement, barely alive, and unidentifiable: the woman can’t speak, there are no missing persons reports that match their profile, and the confused, elderly man who owns the house claims he has never seen them before. The inhabitants of the quiet street are in shock—how could this happen right under their noses? But Detective Inspector Adam Fawley knows nothing is impossible. And no one is as innocent as they seem.

As the police grow desperate for a lead, Fawley stumbles across a breakthrough, a link to a case he worked years before about another young woman and child gone missing, never solved. When he realizes the missing woman’s house is directly adjacent to the house in this case, he thinks he might have found the connection that could bring justice for both women. But there’s something not quite right about the little boy from the basement, and the truth will send shockwaves through the force that Fawley never could have anticipated.

A deeply unsettling, heart-stopping mystery of long-buried secrets and the monsters who hide in plain sight, In the Dark is the second gripping novel featuring DI Adam Fawley.

Praise For In the Dark: A Novel (A DI Adam Fawley Novel #2)…

Praise for In the Dark

“A gripping suspense novel about misguided assumptions and secrets hidden in plain sight . . . its final destination is anything but expected.” —Bustle

“The second in what will hopefully be a long-running series . . . Just as engrossing and complex as [Close to Home].” —CrimeReads (The Most-Anticipated Crime Books of 2019)

“Arresting and unnerving . . . Hunter exposes human frailties such as social and governmental missteps and policemen’s personal mess-ups while celebrating the essential humanity of those sworn to serve and protect. Readers will eagerly await Fawley’s next outing.” —Publishers Weekly (starred review)

“[Hunter] gradually unwind[s] a case that is much more complicated that it initially appears. This slow-­burning procedural builds with tension as the narrative moves through several cunning twists, offering fans a pleasing follow-up to the first book in the series, Close to Home.” —Library Journal

“A tense exploration of manipulation and betrayal . . . A solid psychological thriller with carefully developed characters and disturbing, cleverly masked revelations that will appeal to fans of Tana French and Sophie Hannah.” —Booklist

“In the Dark kept me up into the late hours. Clever and wonderfully complex.” —Jane Corry, bestselling author of My Husband’s Wife

“A classy, agile, fresh, unpredictable and utterly compelling gift of a book: hats off!” —Nicci French, author of the Frieda Klein series

"This a real gripper of a read and hugely satisfying.” —Peter James, author of the Roy Grace series


Praise for Close to Home

“Hunter does a masterly job of building tension and keeping the reader guessing to the very end.” —Publishers Weekly

“This well-written psychological drama will keep you guessing until the very end.” —Book Reporter

“Close to Home is an utterly immersive story that pulls you into the heart of a search for a missing child. Compulsive, with an ending you will not see coming.” —Emma Kavanagh, author of After We Fall

“An amazing, fast-paced thrill ride and one of the best crime thrillers I have ever read! An exciting plot combined with top-quality writing—just perfect!” —Kathryn Croft, author of The Girl with No Past and While You Were Sleeping

“Great characters, engrossing story, and a twist at the end I did not see coming.” —Marika Cobbold, author of Frozen Music

“Close to Home hit the ground running and didn’t stop right until the final page. . . . The last [twist] was a genuine stroke of genius . . . told in a unique, modern way that sets the bar for new crime writers. . . . The last time I felt that excited by a book was A Kind Worth Killing.” —John Marrs, author of When You Disappeared and The One

“This book won’t let you off the hook. Once you open it and start reading, forget about doing much else at all.” —Adèle Geras, author of Troy

“[I] finished Close to Home in one sitting! Such a cleverly written, chilling, and twisty read.” —Nuala Ellwood, author of My Sister’s Bones

Cara Hunter lives and works in Oxford. She also studied for a degree and PhD in English literature at Oxford University.
Loading...
or
Not Currently Available for Direct Purchase