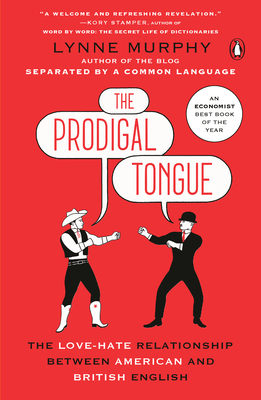 The Love-Hate Relationship Between American and British English

CHOSEN BY THE ECONOMIST AS A BEST BOOK OF THE YEAR

“English accents are the sexiest.”
“Americans have ruined the English language.”

Such claims about the English language are often repeated but rarely examined. Professor Lynne Murphy is on the linguistic front line. In The Prodigal Tongue she explores the fiction and reality of the special relationship between British and American English. By examining the causes and symptoms of American Verbal Inferiority Complex and its flipside, British Verbal Superiority Complex, Murphy unravels the prejudices, stereotypes and insecurities that shape our attitudes to our own language.

With great humo(u)r and new insights, Lynne Murphy looks at the social, political and linguistic forces that have driven American and British English in different directions: how Americans got from centre to center, why British accents are growing away from American ones, and what different things we mean when we say estate, frown, or middle class. Is anyone winning this war of the words? Will Yanks and Brits ever really understand each other?

Praise For The Prodigal Tongue: The Love-Hate Relationship Between American and British English…

"The book’s chief pleasure is a simple one: Instead of sending the language to school, it savors a great many words and phrases that are staples on one side of the pond and unfamiliar on the other...her essential argument is that the plurality of English, a result of the riotous drama of history, is something to extol." —Wall Street Journal

“The Prodigal Tongue [is] a delightful and useful book, going beyond the mere variations in the two dialects to explain historical development of the language, the linguistic underpinnings, and the social dimension, all explained conversationally… Rather than fret over England’s imagined superiority and America’s imagined inferiority, or repine over divergent developments in English over the past couple of centuries, Lynne Murphy would have us understand how rich and sturdy English is, that we may come to understand and delight in the richness of our differences. Buy the book.” —The Baltimore Sun

"Thoughtful, funny, and approachable... The book’s momentum comes from Murphy’s witty presentation, but its real power comes from its commitment to inquiry and its profound belief that 'communication involves a million little acts of faith.'" —Publishers Weekly

"[Lynne Murphy] has a delightfully sardonic style... A passionate defense (or is it defence?) of the 'fantastically flexible medium' that is English." —Kirkus Reviews

"[Murphy’s] delivery is sparkling, her approach mischievous, her material brightened by the unexpected…a potpourri of enchanting, counterintuitive surprises…The Prodigal Tongue is playful, funny, smart and often humbling… before the apocalypse, you could do worse than read Lynne Murphy’s delightful book." —Times Literary Supplement

"How did we get our knickers in such a twist? The British sneer at 'creeping Americanisms' that are neither creeping nor American. Meanwhile, their cousins in the US have an inferiority complex about their English and lust after those plummy British accents. Enter Lynne Murphy, a linguist who has a foot in each culture and a unique understanding of the Great Divide. The Prodigal Tongue is great fun—impeccably researched and outright funny at the same time (it should be required reading for Prince Charles, the quintessential sneerer). Murphy is one smart cookie, or should I say biscuit?” —Patricia T. O'Conner, author of Woe Is I and, with Stewart Kellerman, Origins of the Specious

“The war of words waged between Americans and Brits has been filled with dour pedantry on both sides—which is what makes Murphy's book such a welcome and refreshing revelation. Murphy playfully and expertly pokes at the linguistic chauvinism ​displayed on both sides of the Atlantic, slyly overturning false assumptions and explaining the linguistic ins and outs of each other's speech with candor and humor. She pulls back the curtain not just on our language, but our shared quirks, loves, and frustrations, and in the process, extols our linguistic differences as part of the rich history of English and the nations that speak it. With wit and expertise, The Prodigal Tongue calls all English speakers home to a language big enough for both fries and chips, bumbershoots and brollies.” —Kory Stamper, author of Word by Word

"Forget the usual bumbershoots and lifts and lorries—Lynne Murphy's book on the difference between English in America and English in England is full of much more interesting things. Did you know that increasing numbers of Brits are saying 'haitch' instead of 'aitch' for the name of the letter H? Or that Americans are using the subjunctive ever MORE lately? Or that James Corden was advised when he started hosting the Late, Late Show that Americans find WILLY and SHAG cute but not HALF-CUT and KNACKERED? You'll be chuffed as nuts on every page." —John McWhorter, author of Words on the Move and Talking Back, Talking Black

"No one knows how to navigate the transatlantic language divide better than Lynne Murphy. Moving beyond facile stereotypes about British and American English, she delves into subtle linguistic nuances with wit and aplomb. The Prodigal Tongue is a wonderful reading experience for anyone interested in understanding the true nature of these two distinct 'nationlects.'"
—Ben Zimmer, language columnist for The Wall Street Journal

Lynne Murphy is Professor of Linguistics at the University of Sussex. Born and raised in New York State, she studied Linguistics at the Universities of Massachusetts and Illinois, before starting her academic career in South Africa and Texas. Since 2000, she has lived in Brighton, England, where she has acquired an English husband, an English daughter, and an alter ego: Lynneguist, author of the award-winning blog Separated by a Common Language.
Loading...
or support indie stores by buying on