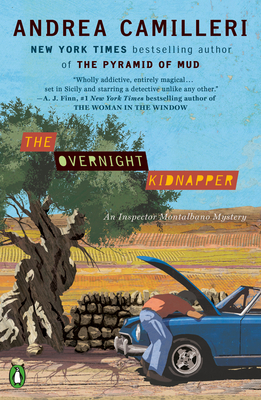 The day gets off to a bad start for Montalbano: while trying to break up a fight on Marinella beach, he hits the wrong man and is stopped by the Carabinieri. When he finally gets to the office, the inspector learns about a strange abduction: a woman was abducted, drugged, and then released unharmed only hours later. Within a few days, the same thing happens again. Both women are thirty years old and work in a bank.

Montalbano also has to deal with an arson case. A shop has burned down, and its owner, Marcello Di Carlo, seems to have vanished into thin air. At first this seems like a trivial case, but a third abduction—yet again of a girl who works in a bank—and the discovery of a body bring up new questions.

Praise For The Overnight Kidnapper (An Inspector Montalbano Mystery #23)…

“The Sicilian dialect . . . as rendered in Sartarelli’s adept translation, provides comic relief. Camilleri fans are in for a treat.” —Publishers Weekly

“[The Overnight Kidnapper is] another wry, amiable procedural from the prolific Camilleri, whose unflappably put-upon hero soldiers on no matter how absurd the crime or aggravating the situation.” —Kirkus Reviews


Praise for Andrea Camilleri and the Montalbano Series:

Andrea Camilleri, a mega-bestseller in Italy and Germany, is the author of the New York Times bestselling Inspector Montalbano mystery series as well as historical novels that take place in nineteenth-century Sicily. His books have been made into Italian television shows and translated into thirty-two languages. His thirteenth Montalbano novel, The Potter’s Field, won the Crime Writers’ Association International Dagger Award and was longlisted for the IMPAC Dublin Literary Award.

Stephen Sartarelli is an award-winning translator and the author of three books of poetry.
Loading...
or support indie stores by buying on
(This book is on backorder)