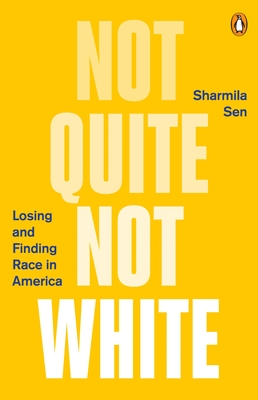 Not Quite Not White

Losing and Finding Race in America

Winner of the ALA Asian/Pacific American Award for Nonfiction

"Captivating... [a] heartfelt account of how newcomers carve a space for themselves in the melting pot of America."
--Publishers Weekly

A first-generation immigrant's "intimate, passionate look at race in America" (Viet Thanh Nguyen), an American's journey into the heart of not-whiteness.

At the age of 12, Sharmila Sen emigrated from India to the U.S. The year was 1982, and everywhere she turned, she was asked to self-report her race - on INS forms, at the doctor's office, in middle school. Never identifying with a race in the India of her childhood, she rejects her new "not quite" designation - not quite white, not quite black, not quite Asian -- and spends much of her life attempting to blend into American whiteness. But after her teen years trying to assimilate--watching shows like General Hospital and The Jeffersons, dancing to Duran Duran and Prince, and perfecting the art of Jell-O no-bake desserts--she is forced to reckon with the hard questions: What does it mean to be white, why does whiteness retain the magic cloak of invisibility while other colors are made hypervisible, and how much does whiteness figure into Americanness?

Part memoir, part manifesto, Not Quite Not White is a searing appraisal of race and a path forward for the next not quite not white generation --a witty and sharply honest story of discovering that not-whiteness can be the very thing that makes us American.

Praise For Not Quite Not White: Losing and Finding Race in America…

“[A] captivating memoir ... [a] heartfelt account of how newcomers carve a space for themselves in the melting pot of America.”
—Publishers Weekly

“In this intimate, passionate look at race in America, Sen considers the price paid by nonwhite immigrants who try to become white, while always wearing a smiling face. Her provocative solution is for people like us to defiantly embrace not being white. That feels just right to me.”
—Viet Thanh Nguyen, Pulitzer Prize–winning author of The Sympathizer and The Refugees

“A stylish, sharp, witty, and honest analysis, from an engagingly personal perspective, of that inexorable American problem — race. By the time I reached the end — very quickly, I must add, for it was snappy in its pacing — I was moved enough to want to stand up and applaud for a long time.”
—Neel Mukherjee, author of A State of Freedom

“Sen breaks the silence about the costs of living as a ‘not white’ American in a society where whiteness is the unspoken norm. A generation from now, ‘not white’ Americans, like Sen's children and mine, will constitute the majority of all Americans. Yet the institutions that maintain white supremacy remain largely unreconstructed. This important book dares to call out the hypocrisies of the current racialized order and imagines another future for our children's generation.”
—Kushanava Choudhury, author of The Epic City

“Sharmila Sen’s wonderful memoir Not Quite Not White … is a delightfully timely intervention about the complexity of identity-formation and identity politics in America.”
—Henry Louis Gates, Jr.

“Timely and eloquent, Sen's book is a welcome addition to the growing body of literature that engages with the topic of race from outside the white/black binary. Insightful, relevant reading for these times.”
—Kirkus

“Sharmila Sen’s new book is not quite memoir and not quite manifesto. It’s rife with interests of the in-between, exploring race and assimilation in the United States and journeys into the many contradictions at the heart of non-whiteness. As a teenager who moves to America in the 1980s, Sen is eventually forced to reckon with the hard questions: What does it mean to be white, why does whiteness retain the magic cloak of invisibility while other colors are made hypervisible, and how much does whiteness figure into Americanness?”
—Asian American Writers' Workshop

“In an era when race is both hypervisible and hypertopical, Sen's honest and frank recounting of her emigration to America is welcome – and so is her humor. A section on the ‘customs of the country [America]’ will make you laugh. But overall, ‘Not Quite Not White’ will make you really think, and consider what it means to be "not-white" in America.”
—Shondaland.com

“In Not Quite Not White, her vast though lightly worn erudition enables her to connect her own story of geographic and cultural dislocation with a fascinating, self-reflexive journey through the canons and archives of her several worlds: from Bengali children’s books to Bollywood movies, from the Reagan-era hits of US network TV to the obscure titles on grad school syllabi. She reflects on her adolescent experiences with racial passing through readings of James Weldon Johnson’s Autobiography of an Ex-Colored Man and references to the Borg from Star Trek. Later she traces her connections with Mary Rowlandson, whose captivity narrative was published in Cambridge, Massachusetts, precisely 300 years before Sen arrived there in 1982.”
—Public Books

Sharmila Sen grew up in Calcutta, India, and immigrated to the United States when she was twelve. She was educated in the public schools of Cambridge, Mass., received her A.B. from Harvard and her Ph.D. from Yale in English literature. As an assistant professor at Harvard she taught courses on literatures from Africa, Asia, and the Caribbean for seven years. Currently, she is the Editorial Director at Harvard University Press. Sharmila has lived and worked in India, Pakistan, and Bangladesh. She has lectured around the world on postcolonial literature and culture and published essays on racism and immigration. Sharmila resides in Cambridge, Mass., with her architect husband and their three children.
Loading...
or support indie stores by buying on