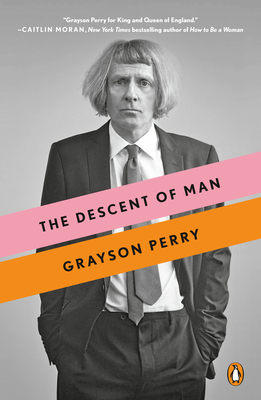 The Descent of Man

What does it mean to be male in the 21st Century? Award-winning artist Grayson Perry explores what masculinity is: from sex to power, from fashion to career prospects, and what it could become—with illustrations throughout.

In this witty and necessary new book, artist Grayson Perry trains his keen eye on the world of men to ask, what sort of man would make the world a better place? What would happen if we rethought the macho, outdated version of manhood, and embraced a different ideal? In the current atmosphere of bullying, intolerance and misogyny, demonstrated in the recent Trump versus Clinton presidential campaign, The Descent of Man is a timely and essential addition to current conversations around gender.

Apart from gaining vast new wardrobe options, the real benefit might be that a newly fitted masculinity will allow men to have better relationships—and that’s happiness, right? Grayson Perry admits he’s not immune from the stereotypes himself—yet his thoughts on everything from power to physical appearance, from emotions to a brand new Manifesto for Men, are shot through with honesty, tenderness, and the belief that, for everyone to benefit, updating masculinity has to be something men decide to do themselves. They have nothing to lose but their hang-ups.

Praise For The Descent of Man…

“Perry is an eloquent and witty tour guide through the fun house that is modern masculinity. He wants us guys to be weirder, freer, less predictable. He’s just the man for the job.”—The New York Times

“Witty… A funny, engaging, and at times penetrating trek through the tricky landscape of contemporary masculinity…a slim book, but it packs plenty of surprises per page.”—NPR

"Conversational and engaging... [Perry is] less concerned with apologizing for masculinity than he is in persuading men about all the ways in which it’s damaging their lives.”—The Atlantic

"In a world where a man who talks openly about kissing and grabbing women without consent can be taken seriously as a candidate for leader of the 'free' world, you may wonder how toxic masculinity has spun out of control. As an antidote to all the bully posturing, perhaps the wisdom of a famous cross-dressing artist can help explain how we got here and how we can move forward, so it is time to pick up Grayson Perry's The Descent of Man and begin to unravel the mystery of toxic masculinity."—Huffington Post

“Grayson Perry for King and Queen of England.”—Caitlin Moran, New York Times bestselling author of How to Be a Woman

"With its non-macho slender girth and personal, engaging approach, [The Descent of Man] is a breeze of a read, and one that makes you see our male-manufactured world a little differently."—Matt Haig, The Guardian

Grayson Perry’s first art prize was a large papier-mâché head he awarded to himself as part of a performance art project at college in 1980. Since then he has won many other awards, including the Turner Prize in 2003. He is now one of Britain’s most celebrated artists and has had major solo exhibitions all over the world. His 2013 BBC Reith Lectures were the most popular lectures since the series began. He won a BAFTA for his Channel 4 documentary on the creation of six new tapestries entitled “The Vanity of Small Differences, All in the Best Possible Taste”, for which he was also awarded Best Presenter at the Grierson British Documentary Awards.
Loading...
or support indie stores by buying on