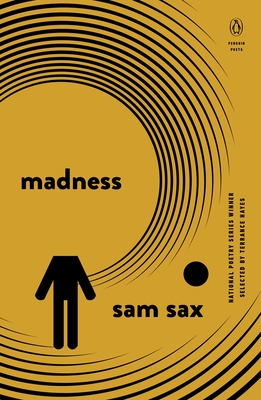 In this ­­­powerful debut collection, sam sax explores and explodes the linkages between desire, addiction, and the history of mental health. These brave, formally dexterous poems examine antiquated diagnoses and procedures from hysteria to lobotomy; offer meditations on risky sex; and take up the poet’s personal and family histories as mental health patients and practitioners. Ultimately, Madness attempts to build a queer lineage out of inherited language and cultural artifacts; these poems trouble the static categories of sanity, heterosexuality, masculinity, normality, and health. sax’s innovative collection embodies the strange and disjunctive workings of the mind as it grapples to make sense of the world around it.

“[A] startling debut . . . I read Madness in a kind of fever, transported into its dreamscape of disorders, diagnoses, addictions, and procedures, shook by its lyrics of desire . . . [sax’s] poems hit like sacred stimulants and wake the body from torpor.” – Diana Whitney, The San Francisco Chronicle

“Exploring addiction, mental health, and the frailties of the human body, sax’s formally agile work upends and reinvents the notion of normalcy, coaxing you closer with a kind of relentless, astral intensity.” – J. Mae Barizo, The Rumpus

"Madness questions the concept of madness and the actions taken in the name of its treatment . . . sax gives us work filled with human frailty, poignant memories, and contemplation." – Kenyon Review

“sax’s voice is distinctly his own. His thrilling debut collection, Madness, ripples with a dark candor that seduces us even as we try to look away.” – Huffington Post

“[A] beautifully concentrated howl of a book, a startling debut . . . coolly crafted . . . [sax is] refreshingly frank as he speaks out to us.  A terrific first collection, highly recommended for poetry lovers.” – Library Journal

“Madness is a wild, resolute book. An exposed, unbridled energy drives its emotional truths while virtuoso technique undergirds its formal and intellectual authority. Sections lead with poems entitled ‘Psychotherapy’ and feature idiosyncratic songs, dramas and hallucinatory intensities. This is a fine, otherworldly madness. This is an ardent, vulnerable madness. This is an astounding debut. sam sax is an astounding poet.” – Terrance Hayes

“I message you from the restive belly of these poems. I entered willingly, was knocked to my knees and gradually realized there was no way out.  Behind some of these doors was sex that pulsed rampant and slipsilver; behind others were at least a dozen darknesses bulging frantically.  However, this is not an urgent message. I do not desire rescue. I was born addicted to terror as lyric. This is a madness I relish.” – Patricia Smith

"These are poems so unapologetically fierce and filthy they are holy. It’s so rare to read words that know they are pushed to the brink, bringing their reader to an edge that didn’t exist before. I’m astonished at the peculiarity and specificity of this poet’s vision—it is a vision that encompasses all the other senses, which gathers and displays the senses it’s quite possible we didn’t have before, or took leave of, or have yet to grow." - Brenda Shaughnessey

sam sax is a queer Jewish writer and educator. He's received fellowships from the National Endowment for the Arts, Lambda Literary, The MacDowell Colony, the Blue Mountain Center, and the Michener Center for Writers. He's the winner of the 2016 Iowa Review Award and his poems have appeared in The American Poetry Review, Gulf Coast, Ploughshares, Poetry, and other journals.
Loading...
or
Not Currently Available for Direct Purchase