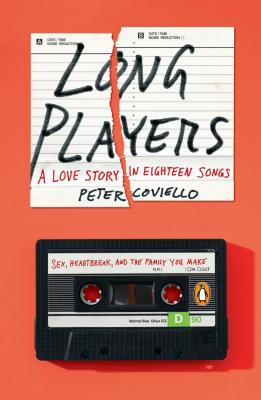 A Love Story in Eighteen Songs

“Sad, joyous, funny, heart-cracking: I can’t remember the last time I read a book that rendered such raw feeling with such intricate intelligence.” —Gayle Salamon, ARTFORUM

“A beautiful book. Deeply personal and yet entirely universal. . . A travelogue through the landscape of a broken heart.” —Elizabeth Gilbert, bestselling author of Eat Pray Love

A passionate, heartfelt story about the many ways we fall in love: with books, bands and records, friends and lovers, and the families we make.

Have you ever fallen in love—exalting, wracking, hilarious love—with a song? Long Players is a book about that everyday kind of besottedness—and, also, about those other, more entangling sorts of love that songs can propel us into. We follow Peter Coviello through his happy marriage, his blindsiding divorce, and his fumbling post marital forays into sex and romance.

Above all we travel with him as he calibrates, mix by mix and song by song, his place in the lives of two little girls, his suddenly ex-stepdaughters. In his grief, he considers what keeps us alive (sex, talk, dancing) and the limitless grace of pop songs.

Peter Coviello has written about Walt Whitman, Mormon polygamy, Steely Dan, the history of sexuality, queer children, American literature, stepparenthood, and Prince. This work has appeared in The Believer, Frieze, Avidly, Raritan, and the Los Angeles Review of Books, as well as in several books. In 2017–18, he was a fellow at the Institute for Advanced Study in Princeton, New Jersey. He lives in Chicago.

Praise For Long Players: A Love Story in Eighteen Songs…

“A searing, unflinching, self-indicting daybook of one man’s climb down far-flung caverns of personal loss & self-searching into a new understanding of his place in the world: the sort of journey, Coviello suggests, that the music accompanying us along the way is always teaching us to take, if and when we become truly willing to listen.”
—John Darnielle, bestselling author of Universal Harvester and primary member of The Mountain Goats

“Long Players is a beautiful book. Deeply personal and yet entirely universal, this memoir is a sort of travelogue through the landscape of a broken heart. I found familiarity in these pages, along with grieving and hope. Peter Coviello is a writer of great humanity, talent, and honesty.”
—Elizabeth Gilbert, bestselling author of Eat Pray Love and Big Magic

"Long Players is a passionate, brainy, headlong story of love and heartbreak and devastation and decadence and survival and back to love again—it’s like an Italian aria crossed with punk, a Puccini/Clash mashup maybe, of gorgeously unspooling keening mixed with raw, punchy shock. All the lovelorn splayed-out romantics everywhere will cheer for Peter Coviello through every note and phrase.”
—Kate Christensen, PEN/Faulkner-award winning author of The Great Man and Blue Plate Special

“With an abundance of literary references and an abiding, generous intelligence, Long Players ​is full of...everything: family and friends, sex and music, betrayal, heartbreak and anger. But mostly, this book is full of love…Coviello has written an incredible book that will make you want to love the people and things the author does.”
—Brock Clarke, author of The Price of the Haircut and The Happiest People in the World

“Peter Coviello’s Long Players: if Charlotte Brontë and Edith Wharton co-wrote a fictional memoir about a bearded, beloved and despairing Melville/Thoreau/queer theory scholar aspiring to theorize away his heartbreak - and creating, in the process, something ineffably else.”
—Jordy Rosenberg, author of Confessions of the Fox

“A sprawling and tempestuous affair. . .[with] all the shimmering choruses and gloomy in-between patches of the songs he listens to. . .Memorably passionate”
—Publishers Weekly

“A heartfelt and hyperliterate take on love as a mixtape…. [Coviello] is a true believer in the power of love and in the magic of certain pop songs to encapsulate, transform, infect, and heal.… Coviello's style imitates his heroes Henry James and George Eliot, and reading his book feels a bit like finding a cache of letters from one close friend to another, with the writer casually unraveling on the page…. While some other High Fidelity-inspired memoirs undoubtedly "do" the music better, few outpace the grim vivacity of Coviello's writing or match the depth of feeling he summons from the soundtrack of his own neuroses. A diary of devastation too good not to share.”
—Kirkus Reviews

“Long Players understands, painfully so at times, that pop songs don’t have all the answers. Nor should they. But sometimes, listening to the right songs at the right moments can help you arrive at the right questions.”
—Houston Chronicle

“Peter Coviello has written a stingingly funny book about being, ‘of all mystifying things, an ex-stepparent.’… Throughout the book, Coviello self-medicates with sex and drugs, but it’s rock and roll that proves salvific, and he atomizes his favorite songs with a nuclear physicist’s precision.”
—Portland Press Herald

“What would Henry James have had to say about listening to pop songs alone in a car? That may have been a thought that crossed my mind when reading Peter Coviello’s memoir of divorce and recovery … He might have thought to call a moving car with a working sound system, as Coviello so perfectly does, a ‘private theater of emotional extravagance’ … If James seems a far-fetched comparison, it’s only because Coviello has done something in his vein: written a story, in the most self-aware of voices, about the limits of self-awareness, and how hard-won a knowledge of those limits can be.”
—Public Books

“Sad, joyous, funny, heart-cracking: I can’t remember the last time I read a book that rendered such raw feeling with such intricate intelligence.”
—Gayle Salamon, ARTFORUM

“Sad, joyous, funny, heart-cracking: I can’t remember the last time I read a book that rendered such raw feeling with such intricate intelligence.”—Gayle Salamon, ARTFORUM