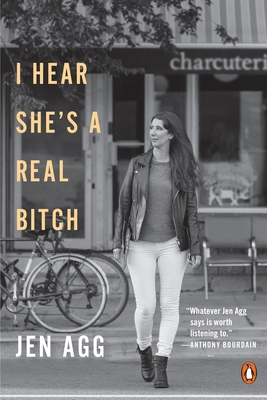 “A terrific, beautifully written, frank, and funny memoir, and a compelling argument for pulling down the long outdated system of ‘bro’ culture that has dominated the industry since what feels like the beginning of time.” —Anthony Bourdain

From the moment she opened her first bar, Jen Agg knew she could only be her own boss from then on. I Hear She’s a Real Bitch tells the story of how she fought her way through the patriarchal service industry and made it happen, from getting her first job pouring drinks all the way to starting Toronto’s culinary revival and running some of Canada’s most famous restaurants. And she shares what she discovered through years of hard work and learning from her mistakes: how to run a great restaurant that’s also a great business.

Readers who loved Gabrielle Hamilton’s bestselling Blood, Bones, and Butter will devour this raw, uninhibited debut. Studded with Agg’s frank and often hilarious observations on an industry in which sexism has been normalized, I Hear She’s a Real Bitch is more than just a story about starting a restaurant: it is a rallying cry for a feminist revolution in the culinary world.

Jen Agg is the owner of The Black Hoof, Grey Gardens, Rhum Corner, and Cocktail Bar in Toronto and Agrikol in Montreal. She is the author of I Hear She’s a Real Bitch, and is a big fan of nachos. You can find her most nights, in one of her spots, tipping back rosé as slowly as possible, which is to say, not that slowly at all.

Praise For I Hear She's a Real Bitch…

"Whatever Jen Agg says is worth listening to. As owner of Toronto's excellent The Black Hoof, she's one of the most vocal and interesting observers of the peculiar subculture of the restaurant business. I Hear She's a Real Bitch is the book a lot of us have been waiting for. A terrific, beautifully written, frank, and funny memoir, and a compelling argument for pulling down the long outdated system of 'bro' culture that has dominated the industry since what feels like the beginning of time." —Anthony Bourdain

"The drive of this Toronto restaurateur, her hard work, her sense of fight, her exposing the big industry secret — female restaurant workers are sexually harassed and bullied into the dirty floor — and above all, her joy at being alive every moment light up her autobiography. The book is hot in the reader’s hands." —Toronto Star, "Best Nonfiction of 2017"

"As one of the most polarizing figures in the Canadian food industry, Jen Agg knows she has a reputation. And in I Hear She’s A Real Bitch, that fact may be how she pulls you in, but in recounting how she got to where she is as a successful restaurateur with an exacting work ethic and as impressive a palate, she writes a personal and motivating memoir. However you feel about her, Agg proves she’s a force to be reckoned with (and aspire to)." —National Post (Canada), "Best Books of 2017"

"Jen Agg, the Toronto-based restaurateur, author and advocate for conquering s***tiness in the industry, offers a glimpse into one of the cultural hurdles for change in the industry in her book, I Hear She’s A Real Bitch. Agg describes a familiar construct—an old-school approach to kitchen life, handed from one generation to the next, that’s big on obedience and silence and acceptance of Really Bad S**t—and shows, through her own experience, that this stuff doesn’t stay only in the kitchen. (You really should read the book, Agg describes it better in her own words." —Food & Wine

"Jen Agg has produced a memoir every bit as distinctive as her extraordinary restaurants. It is equal parts steel, grit, sass, TMI and analytic brilliance. Nobody is better at creating the modern bistro, a joint that's someplace, yet also relaxed; meticulous, but utterly without pretension. Agg, it turns out, has an ear to match her eye; she is a dismayingly good writer, and her book is a double how-to: how to be a garishly successful restauranteur; and how to be a semi-completed human being. She has brought every bit of her unique verve to I Hear She's a Real Bitch. (PS: She can be, but she really isn’t.)" —Stephen Metcalf, critic-at-large at Slate and host of the Culture Gabfest podcast

"The culinary world needs more Jen Aggs. . . . If you don't know the name Jen Agg, consider this your notice: It's time to meet her and hear her out." —Eater

"[Jenn Agg's] story comes with a side of empowerment." —Bustle

"Agg does more than talk about her life and growth as a businesswoman. She also exposes double standards in the restaurant industry. . . . You’re going to want to devour this one the day it comes out." —HelloGiggles, "8 New and Upcoming Memoirs That Will Really Make You Think"

"One of Canada's most influential restaurateurs—the woman who introduced Toronto to charcuterie and the $15 cocktail—can write, too. In her candid and chatty new memoir, Agg dishes on the grit it takes to be a successful woman in a dude-dominated world, falling in love with her artist husband and, of course, her reputation for being a 'real bitch.'" —Chatelaine

"Jen Agg insists on being heard. Her plainspoken yet breathlessly disclosing memoir is compulsively readable, highlighting her natural gift for not just telling it like it is, but remembering with heart and with humor. Much like dining at one of her perfectly-lit restaurants, reading Agg is a full-blown experience of the senses. I am grateful for her voice and for how generously she storytells. I read I Hear She's a Bitch all the way through, in one sitting, only putting it down once near the end, so as to delay reaching its final pages." —Durga Chew-Bose, author of Too Much and Not the Mood

"With a memoir title like this, how can you not immediately fall in love with Jen Agg? A first-person account of the restaurant industry and its sexism, I Hear She’s a Real Bitch packs a powerful punch that’ll have you rooting for Agg the whole way through. Incredibly frank, razor sharp, and outrageously funny, this book is just what the food world needs, but it’ll leave you feeling inspired and empowered no matter your line of work. If you want to know what a badass boss looks like, look no further than Agg." —Shondaland
or support indie stores by buying on
Copyright © 2020 American Booksellers Association