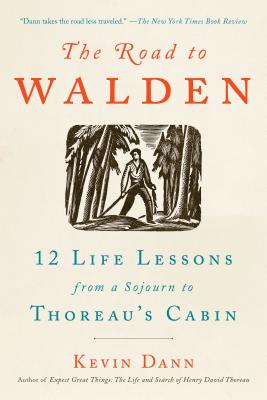 The Road to Walden

12 Life Lessons from a Sojourn to Thoreau's Cabin

The acclaimed author of Expect Great Things: The Life and Search of Henry David Thoreau traverses on foot from Manhattan to Walden Pond, retracing Thoreau's steps and unlocking the practical principles of the mystic's life in the woods.

When Henry David Thoreau launched his experiment in living at Walden Pond, he began by walking beyond the narrow limits of his neighbors, simply by putting himself at a mile remove from Concord's bourgeois epicenter - and a thousand-mile remove from stasis, complacency, and conformity. Kevin Dann emulates and extends Thoreau's experiment in radical self-education. Alternating between personal anecdotes from his spring 2017 walking pilgrimage and other "traveler" encounters and episodes told by Thoreau, Dann structures his book around 12 "injunctions"--distillations of seminal stories about overcoming convention and stasis. In this essential reading for every Thoreau enthusiast, naturalist and historian Kevin Dann brings to life an essential American icon in refreshing and modern way.

Praise For The Road to Walden: 12 Life Lessons from a Sojourn to Thoreau's Cabin…

"Far from the well-worn paths of academic scholarship, Dann acquaints his reader with a protagonist who is an American mystic, a new-age prophet, a cosmic explorer … Dann takes the road less traveled, leading a reader into out-of-the-way places, through hidden passages in Thoreau’s personal life … Expect Great Things is eccentric, strange, even far-fetched, but nonetheless admirable — a bit like Henry David Thoreau.”
-John Kaag, New York Times Book Review

“A graceful, attentive inquiry into the mind of Henry David Thoreau … Dann shows an ease with the metaphysical (which is typically considered at odds with the discipline of the historian), making a warm sympathetic argument for Thoreau as a mystic and visionary and redefining his reputation.”
–Publishers Weekly

"A reappraisal of the writer's life, focusing on Thoreau's connection to, and celebration of, the invisible and ineffable ... Thoreau emerges from this admiring portrait as a man richly connected to the cosmos."
-Kirkus Reviews

“If you think you know all about Thoreau think again. Expect Great Thingsreintroduces an American icon in a thoroughly fresh and vital way, bringing to crackling life a time and place full of drama, achievement, adventure, and excitement. Thoreau reached spiritual maturity in an age like our own, full of uncertainty and potential. Kevin Dann’s highly readable prose places Thoreau amid an assortment of eccentric characters and shows how his philosophy of solitude and nature may be more relevant today than ever before.”
–Gary Lachman, author of The Secret Teachers of the Western World

“A vivid and beautifully written portrait not only of Thoreau but of his milieu. And it does full justice to Thoreau’s nature mysticism.”
–Richard Smoley, author of How God Became God: What Scholars Are Really Saying about God and the Bible

“Kevin Dann’s biography of Henry David Thoreau offers a refreshing perspective on the most down-to-earth of the Transcendentalists. Dann shows how Thoreau’s free-ranging musings encompassed many of the otherworldly interests of his contemporaries, such as a fascination with faeries, mysterious appearances of gossamer, and other curiosities. Dann makes a strong case that while Thoreau’s writings were grounded in tough-minded observations of nature, his own worldview and ‘sympathetic science’ were far from disenchanted.”
–Fred Nadis, author of The Man from Mars: Ray Palmer’s Amazing Pulp Adventure and Wonder Shows: Performing Science, Magic, and Religion in America

Historian, naturalist, and troubadour Kevin Dann is the acclaimed author of Expect Great Things: The Life and Search of Henry David Thoreau, and books including Across the Great Border Fault: The Naturalist Myth in America and Lewis Creek Lost and Found. He received his PhD from Rutgers University in American History and Environmental History. Dann has taught at Rutgers, University of Vermont, and the State University of New York. In the spring of 2009, he walked from Montreal to Manhattan to commemorate the 400th anniversaries of Hudson's and Champlain's voyages, and, having crossed the Brooklyn Bridge, decided to make his home there.
Loading...
or
Not Currently Available for Direct Purchase