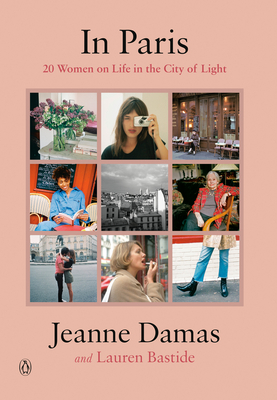 20 Women on Life in the City of Light

"If the Internet could create its version of the perfect girl, Jeanne Damas would probably be her. . . . She's nailed that French girl je ne sais quoi." --Vogue

A window on the world's most stylish city, with more than 100 full-color photos and profiles of 20 diverse and inspiring Parisian women, by "the coolest, most beautiful French girl in France" (GQ) and a former editor in chief of French Elle

"We've always been crazy in love with this city. . . . We love its arrogance, its clumsiness, its simplicity. And especially the women who live here."

Two quintessential Parisian women--model and fashion designer Jeanne Damas and journalist Lauren Bastide--shine a spotlight on twenty real-life women of Paris, dispelling the myth that there's only one type of Parisian woman and introducing us to the city that real Parisiennes live in. They're booksellers, singers, writers, activists, and antique dealers; they live in small studios, spacious apartments, or houseboats; their ages range from fourteen to seventy . . . and all embody the effortless chic and insouciant spirit of the legendary Parisian woman.

In Paris takes us into these women's lives, telling us about their careers, families, favorite nightlife spots, shopping habits, and beloved books and films. Full-color photos taken by Jeanne herself accompany charming lists of advice on the French art de vivre--from the best places to people-watch with a glass of wine after work to the perfect Parisian playlist to the ten things that a French woman would never, ever post on Instagram. Witty, elegant, and modern, In Paris is an ode to Paris through the eyes of its eternally cool women--for everyone who has ever dreamed of one day living in Paris.

Jeanne Damas is a Parisian model, fashion icon, actress, designer, and photographer. She recently launched her own fashion line, Rouje, and starred in the film Rock'n Roll alongside Marion Cotillard. She has collaborated with many international brands, including Gucci, Mango, Nina Ricci, Macy's, and &otherstories and is one of Forbes's "30 Under 30."

Lauren Bastide is a French journalist who has previously been the editor in chief of French Elle and a columnist on the famous French television show Le Grand Journal. She currently hosts the feminist podcast La Poudre, France's top independent podcast, in which she interviews inspiring women from diverse backgrounds.


Praise For In Paris: 20 Women on Life in the City of Light…

“A portrait of Paris itself emerges . . . in these tributes to a fabled city . . . reminding armchair travelers that if we can’t all be Parisians, maybe we can at least go there someday.” —Booklist

“Jeanne Damas is the epitome of It Girl. . . . [She] is also the epitome of a French Girl—a wine-drinking, sexy in a low-key way, European sophisticate. Women of all ages love Damas because she exudes that elusive French insouciance. . . . [She is] a treasure trove of the kind of information [about Paris] only a true native can provide.” —GQ, “Jeanne Damas Is the Coolest, Most Beautiful French Girl in France Right Now”

“For many admirers, it is Ms. Damas who represents the ultimate in French girl chic.” —The Wall Street Journal

“In 2017, the year where everyone and their mother is honing in on how to really accomplish that whole ‘couldn’t care less’ French style, Damas has emerged as the perfect spokeswoman.” —The Observer

“Damas has become a digital force to be reckoned with.” —Citizens of Humanity