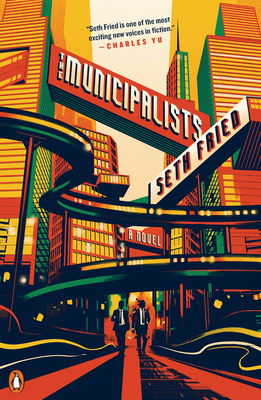 A novel about an unlikely pair of lonely outsiders--one human, one AI--on an adventure to save the great American city of Metropolis written by "one of the most exciting new voices in fiction" (Charles Yu)

*Named one of the best books of the month by Library Journal ("Debut of the Month"), The Verge, io9, Amazon Books, Book of the Month Club, Vol. 1 Brooklyn, NYLON, and Tor.com*

In Metropolis, the gleaming city of tomorrow, the dream of the great American city has been achieved. But all that is about to change, unless a neurotic, rule-following bureaucrat and an irreverent, freewheeling artificial intelligence can save the city from a mysterious terrorist plot that threatens its very existence.

Henry Thompson has dedicated his life to improving America's infrastructure as a proud employee of the United States Municipal Survey. So when the agency comes under attack, he dutifully accepts his unexpected mission to visit Metropolis looking for answers. But his plans to investigate quietly, quickly, and carefully are interrupted by his new partner: a day-drinking know-it-all named OWEN, who also turns out to be the projected embodiment of the agency's supercomputer. Soon, Henry and OWEN are fighting to save not only their own lives and those of the city's millions of inhabitants, but also the soul of Metropolis. The Municipalists is a thrilling, funny, and touching adventure story, a tour-de-force of imagination that trenchantly explores our relationships to the cities around us and the technologies guiding us into the future.

"A new and irreverent take on both real-world politics and sci-fi history."-The Wall Street Journal

Praise For The Municipalists: A Novel…

"Even if you’ve never spent one day in a city, but are just someone who wants to laugh and marvel at Fried’s imagination and wit, this book is also for you. Really, it’s for everyone."—NYLON, "50 Novels You'll Want to Read in 2019"

"A new and irreverent take on both real-world politics and sci-fi history."—The Wall Street Journal

"A fresh and funny take on the near-future crime novel. And in these dystopian times we’re living through, I’d take fresh and funny over an added dose of doom and gloom on top of the hearty serving we eat every single day. I’m terrified of the future, but Fried makes it a little more entertaining. "—Jason Diamond, Vol. 1 Brooklyn

"Deeply, constantly funny, and able to transform from a breezy page-turner into a serious exploration of class and trauma in a few well-turned sentences.”—Tor.com

"A wondrous chimera of a book . . . The Municipalists challenges our reliance on new technology and the utopian ideals we hope it enables. And with it, Fried, who is acclaimed for his wildly imaginative short stories, displays his genre-bending talent and creativity in full force."—CrimeReads

"Having finished writing this piece, I feel simultaneously disheartened and elated; disheartened at not being able to fully describe the weirdness, the originality, the sheer heart within this book, and elated because thousands of readers are about to experience it for themselves. Why am I still talking? Just read it."—Book of the Month Club

"A novel full of people who care deeply about the details, written by someone who understands that the details are what matter. Smart, engaging, poignant and funny (not just book funny—actually funny). Fried is one of the most exciting new voices in fiction, and his debut novel showcases his many talents."—Charles Yu, author of How to Live Safely in a Science Fictional Universe

"The longer you bask in the glow of Seth Fried's wondrous novel, big concepts like Technology and Work and Friendship begin to take on a curious shape, turn into something so unique that you wonder how one writer has so much imagination, so much insight, so much fun with the world they've created. The Municipalists is the work of a hilarious and empathetic talent."—Kevin Wilson, author of The Family Fang

"A thinking person's comic thriller, The Municipalists is a joy ride and a meditation both. Seth Fried is the consummate urban planner of a novelist, providing us with exciting thoroughfares of action as well as quiet gardens of feeling. And the story stars, among other characters, a drunk and vain (but ultimately loveable) computer. What else could a fiction dweller ask for? A wonderful debut novel."—Sam Lipsyte, author of The Ask

"Seth Fried is the future of fiction."—Hannah Tinti, author of The Good Thief

“Seth Fried is a pure delight to read."—Karen Russell, author of Swamplandia!

"[Seth Fried] will make your heart stop and your jaw drop. You will suffer from bouts of thoughtful silence and seizures of hilarity and may even soil yourself with pleasure. Consider yourself warned."—Ben Percy, author Red Moon

Seth Fried is the author of the acclaimed short story collection The Great Frustration. He is a recurring contributor to The New Yorker's "Shouts and Murmurs" and NPR's "Selected Shorts," and his stories have appeared in Tin House, One Story, McSweeney's Quarterly Concern, The Kenyon Review, Vice, and elsewhere. He is also the winner of two Pushcart Prizes and the William Peden Prize.
Loading...
or
Not Currently Available for Direct Purchase