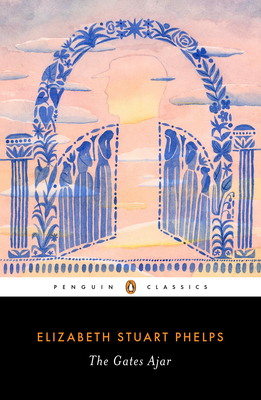 Elizabeth Stuart Phelps's 1868 Reconstruction-era novel The Gates Ajar, in its portrait of inconsolable grief following the American Civil War, helped to shape enduring American ideas about heaven and demonstrated that for American women, the war didn't simply end at Appomattox. When Mary Cabot loses her beloved brother, Union soldier Royal, in the war, she feels as though she will never feel peace again until the arrival of her widowed aunt Winifred. Sharing the wisdom that has comforted her through her grief, Winifred offers Mary a groundbreaking view of the afterlife: a place of loving reunion with all those who were lost. As Winifred ministers to Mary, her vision of the afterlife circulates in the community and attracts local adherents who have similarly suffered losses in the war. Written with the intention of illuminating and bettering the lives of women after the war, The Gates Ajar is an empowering manifesto on conquering grief and a timeless manual for optimism.

Elizabeth Stuart Phelps (August 31, 1844-January 28, 1911) was an early feminist American author and intellectual who challenged traditional Christian beliefs of the afterlife, challenged women's traditional roles in marriage and family, and advocated clothing reform for women. Following the publication of her bestselling novel The Gates Ajar, Phelps became an international literary celebrity, publishing hundreds of essays, stories, and poems, placing work in every major American periodical and writing novels for both adults and children. She lectured on George Eliot at Boston University, the first woman to do so, and contributed to William Dean Howells's collaborative novel, The Whole Family, joining Howells, Henry James and Mary E. Wilkins Freeman, among others. She also became an important voice on religious topics, writing regularly for religious periodicals.

Elizabeth Duquette is Professor of English at Gettysburg College. Her areas of specialty include literature of the American Civil War era and transnational literary culture. She is the author of Loyal Subjects: Bonds of Nation, Race, and Allegiance in Nineteenth-Century America (2010) and the co-editor of Elizabeth Stuart Phelps: Selected Tales, Essays, and Poems (2014) and J19: The Journal of Nineteenth-Century Americanists.

Claudia Stokes is Professor of English at Trinity University. She is the author of The Altar at Home: Sentimental Literature and Nineteenth-Century American Religion (2014). She is also the author of Writers in Retrospect: The Rise of American Literary History, 1875-1910 (2006) and co-editor, with Michael A. Elliott, of American Literary Studies: A Methodological Reader (2002). She is currently writing a book about unoriginality and familiarity in nineteenth-century American literature.