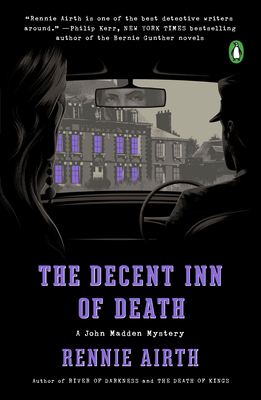 The Decent Inn of Death

Snowed in at a country manor, former Scotland Yard inspectors John Madden and Angus Sinclair find themselves trapped in the company of a murderer.

On a trip into Winchester, former chief inspector Angus Sinclair learns of a tragedy that has taken place in the village he is staying in. Beloved church organist Greta Hartmann has slipped and fallen to her death in a shallow creek, and while investigations conclude it to be an accident, her friend and housemate, Vera, remains unconvinced. After learning that Greta was the widow of a prominent anti-Nazi German preacher, Sinclair meets with the distraught Vera, and he resolves to dig deeper into the story. His investigations lead him to the stately manor of Julia Lesage, where she lives with her devoted staff that includes her secretary, cook, and driver. Though confined to a wheelchair, Julia is an electrifying spirit with a sharp wit, and those who know her adore her. Among those who do, a gentleman with dubious business dealings is also staying at the house--and Julia appears to be in love with him. A blizzard hits, keeping Sinclair, and later Madden, on the grounds with little to do but analyze the case of Greta's death, until a murder takes place, and everyone becomes a suspect.

Praise For The Decent Inn of Death: A John Madden Mystery…

“[The Decent Inn of Death] is a locked-room murder mystery that rivals the best of Agatha Christie, Ruth Rendell or P.D. James.”—BookPage

“Move over, Inspectors Alleyn, Dalgliesh, and Morse, and make room for John Madden in the pantheon of great, civilized English sleuths.”—The New Yorker

“Madden is seamlessly admirable…In an era when our real-life heroes tend to have feet of thick, grubby clay, it can be bracing to spend time with a  man who is naturally but not implausibly noble.”—The Washington Post Book World

“One of the best mysteries in years.”—The Boston Globe

“It’s the tactics and the terrain, the morale and the characters that make the difference between an average thriller and one as good as this.”—The New York Times Book Review

Rennie Airth was born in South Africa and worked as a foreign correspondent for Reuters news service for many years. The first novel in his John Madden mystery series, River of Darkness, won the Grand Prix de Littérature Policière for best international crime novel of 2000 and was nominated for Edgar, Anthony, and Macavity awards.
Loading...
or support indie stores by buying on