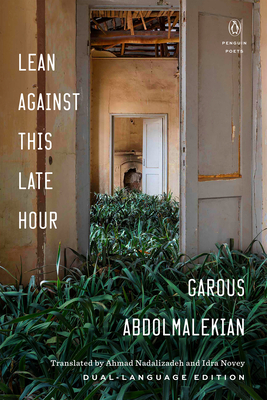 Finalist for the PEN Award for Poetry in Translation

A vivid, "mesmerizing" (New York Times Magazine) portrait of life in the shadow of violence and loss, for readers of both English and Persian

The first selection of poems by renowned Iranian poet Garous Abdolmalekian to appear in English, this collection is a captivating, disorienting descent into the trauma of loss and its aftermath. In spare lines, Abdolmalekian conjures surreal, cinematic images that pan wide as deftly as they narrow into intimate focus. Time is a thread come unspooled: pain arrives before the wound, and the dead wait for sunrise.

Abdolmalekian resists definitive separations between cause and effect, life and death, or heaven and hell, and challenges our sense of what is fixed and what is unsettled and permeable. Though the speakers in these poems are witnesses to the deforming effects of grief and memory, they remain alive to curiosity, to the pleasure of companionship, and to other ways of being and seeing. Lean Against This Late Hour illuminates the images we conjure in the face of abandonment and ruin, and finds them by turns frightening, bewildering, ethereal, and defiant. "This time," a disembodied voice commands, "send us a prophet who only listens."

Praise For Lean Against This Late Hour (Penguin Poets)…

Praise for Lean Against This Late Hour:

“Abdolmalekian deftly weaves together philosophical questions, memorable allegories, and immensely lyrical images with emotional honesty and depth. Yet his poetry is also entirely modern in structure and content, which is a credit to the translators, as well as to the strength and beauty of his natural tone and voice. [He] is a poet of our interconnected, transnational time—this era of citizen against government, of surveillance and mistrust, of loss, despair, and yet somehow, always: of hope and love . . . Abdolmalekian is a necessary voice in the world poetry canon.” —Asymptote

“A major triumph not only because of the beauty and power of the language . . . but also because of the poet’s refusal to surrender subjective experience in the face of overwhelming historical circumstance . . . Abdolmalekian’s extraordinary capacity for empathy is equal to, and may be the source of, his dazzling imagination . . . Given the political tensions on the world stage and the rise in xenophobia in the United States in the past few years, the powerful voice of this extraordinary poet is perhaps more necessary now than ever.” —Michigan Quarterly Review

“One of the gifts of translation—offered so beautifully here by Idra Novey and Ahmad Nadalizadeh—is that it does not displace the original; rather, by opening the text to new readers in varying contexts, it forges additional routes for thinking about entanglements of harm and resistance.” —Claire Schwartz, Jewish Currents

“These plainspoken poems, tinted with a touch of surrealism, are deceptively simple yet affectingly resonant. Part of the pleasure of reading them is seeing the elegant Persian script mirrored on the facing pages — even if you don’t speak a word of the poet’s native language.” —Santa Barbara Independent

“Some works of art can simultaneously break and build up your heart, a marbling of devastation and hope. Lean Against This Late Hour offers such an experience. These [are] nuanced, nimble poems . . . written out of and for difficult days, but they succeed at a fundamental lift that feels natural, no sugar-spooning or sentimentality to be found. This lift is the hard-won hope found in self-awareness . . . Abdolmalekian is a major Iranian poet who should be a mainstay on bedside tables, syllabuses and award shortlists around the world.” —BookPage (starred)

“Accompanied by the Persian originals, this first English-language collection of the renowned Iranian poet’s work comprises 51 sinewy lyrics that evoke a hypnagogic state of consciousness at once ghostly and immediate . . . A lifelong witness to war and oppression in his homeland, Abdolmalekian perceives the constant presence of a dissembling, malevolent force as elemental as air, yet somehow finds glimmers of beauty and hope among the shadows . . . An impressive U.S. debut for a poet whose work invites global recognition.” —Library Journal (starred)

“It is staggering to encounter something that feels so truly new as Garous Abdolmalekian’s Lean Against This Hour. Turning its pages for the first time I felt myself literally gasping out loud, running to read my spouse this line or that poem. Paul Klee wrote about art that wanted to be ‘impelled toward motion and not to be the motor,’ and I feel this so deeply in these crisp translations of Abdolmalekian’s lively lyrics, that irreducible complexity of thinking—about growth, time, desire, trauma—rendered as vectors with staggering precision and disarming clarity: ‘Forest, you are a single tree fleeing the earth a thousand ways.’” —Kaveh Akbar, author of Calling a Wolf a Wolf

“This book announces to the English-speaking world that there are, indeed, still great poets in our day and age. There is still the possibility for the lyric voice to assume something larger, to give shape and form to a myths and dreams that speak out of devastation. In these spare but beautiful, and unforgettably urgent lyrics, the war and memory are everywhere; they are the magnetic field that charges the pages of exquisite precision. Abdolmalekian is a poet who never gives in to the despair: out of history's devastation comes a new and beautiful song. To put it simply: Garous Abdolmalekian is one of the most talented poets on the world scene today. It makes me endlessly happy that we now have his work in these beautiful, precise translations.” —Ilya Kaminsky, author of Deaf Republic

“Garous Abdolmalekian’s Lean Against This Late Hour is a book of aftermath, where speech is pared down to its most basic music. In these haunted and haunting poems, Abdolmalekian refuses the deceptive satisfaction of the observable, and makes, instead, in quietly surreal gestures, the known unknowable again. How lucky we are to behold these poems via Idra Novey and Ahmad Nadalizadeh’s sharp translation, to see in the starkest of lines the pain and trauma of, yes, warfare, but also of life itself. This is a tremendous introduction to his work.” —Solmaz Sharif, author of Look

“Reading Abdolmalekian’s poems is like happening upon a system of non-Euclidian geometry: shapes so clearly rendered, so seemingly inevitable that you’re stunned you had never encountered them before. But then you realize that these elegantly simple lines, in fact, interpenetrate multiple dimensions. The natural and the political, phenomenology and sexuality, reason and imagination fuse into new and compelling hybrids. Only in language can these concepts occupy the same space, and I’m profoundly grateful that English-language readers have, at long last, been offered access to this work.” —Monica Youn, author of Blackacre

“Garous Abdolmalekian’s Lean Against This Late Hour delves deep into the solitary melancholy heart of a poet gripped by the buried secrets of Iran’s historical trauma. With aching intimacy, Abdolmalekian takes dreamlike inventory of the deaths that hang over him. He writes with orphic clarity the silence that the state has imposed upon him and takes a shred of darkness that enshrouds his country and whets it to a blade that sings. This is a powerful, searching, and timeless collection of poems.” —Cathy Park Hong, author of Engine, Empire and Minor Feelings

Garous Abdolmalekian was born in 1980, days after the outbreak of the Iran-Iraq War, and lives in Tehran. He is the author of five poetry books and the recipient of the Karnameh Poetry Book of the Year Award and the Iranian Youth Poetry Book Prize. His poems have been translated into Arabic, French, German, Kurdish, and Spanish. Abdolmalekian is presently the editor of the poetry section at Chesmeh Publications in Tehran and the executive editor of publications at the Youth Poetry Office in Iran.

Ahmad Nadalizadeh is a translator from the Persian and PhD candidate in comparative literature at the University of Oregon.

Idra Novey is a novelist, poet, and translator. She is the award-winning author of the novels Those Who Knew and Ways to Disappear. Her work has been translated into ten languages and she's translated numerous authors from Spanish and Portuguese, most recently Clarice Lispector. For her poetry and translation she has received awards from the PEN Translation Fund, the National Endowment for the Arts, and the Poetry Foundation. She lives in Brooklyn with her family.
Loading...
or support indie stores by buying on
(This book is on backorder)