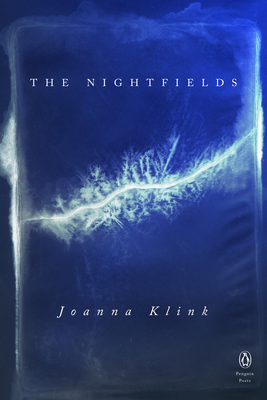 A new collection from a poet whose books "are an amazing experience: harrowing, ravishing, essential, unstoppable" (Louise Glück)

Joanna Klink's fifth book begins with poems of personal loss--a tree ripped out by a windstorm, a friendship broken off after decades, the nearing death of parents. Other poems take on the cost of not loving fully, or are written from bewilderment at the accumulation of losses and at the mercilessness of having, as one ages, to rule things out. There are elegies for friends, and a group of devotional poems. The Nightfields closes with thirty-one metaphysical poems inspired by the artist James Turrell's Roden Crater, an extinct volcano in Arizona that Turrell has been transforming into an observatory for the perception of time. The sequence unfolds as a series of revelations that begin in psychic fear and move gradually toward the possibility of infinitude and connection.

Praise For The Nightfields (Penguin Poets)…

“The hushed and meditative poems in this intensely lovely book manage somehow to feel simultaneously old-fashioned and cutting-edge. Amidst the chaotic noise and incessant annoyances of contemporary life, Klink’s poetry carves out a space in which we are reminded what it is like for an individual consciousness to encounter the awesome mysteries of both the outer universe and the inner self.” —The Washington Post, “Best Poetry Collections of 2020”

“What [Klink] hopes for again and again in this expansive, remarkable volume, her fifth, is the ability to see the universe whole.” —The New York Times Book Review

“Klink is a vatic poet, a seer not just of the body but of bodies in relationship to one another, bodies in relation to the natural world, to the universe both inner and outer . . . Perhaps more than any other poet writing today, Joanna Klink is the Romantic poet of our age, and like the great romantic poets, Wordsworth, Keats, Shelley, the narrator of The Nightfields is often walking through her poems, attuned to the silences and quiet murmurings of the world.” —New York Journal of Books

“Joanna Klink’s The Nightfields has all the visionary lucidity and incisiveness that marks the true originality of her work. The subtlety of what she sees is matched by a language at once hospitable and unsettling. This book has the fluency of someone knowing and finding their way. These are remarkable poems.” —Adam Phillips

“Klink writes with exquisite poignancy, an expansive and stark lyric that has become her signature in this collection. The Nightfieldsreminds us that ‘to want a simple life/might mean/to have given up//on expectation’ yet the collection offers us of the privilege of Klink’s discerning and sometimes ruthless eye on what it means to live from that expectation, to live fully among the wreckage and the triumph.” —Carmen Giménez Smith

“Joanna Klink goes toward poetry with her whole life. To me, she is a landscape poet, who draws more than paints. Her poems contain stars and bone; hope and mercy; meteorology and friendship. Instead of plot, there is subplot, allowing language and feeling to run free. Perhaps there is a spiritual dimension, too, with a pilgrimage through cities and grasslands. In our prosaic age, Klink is a completely original poet—symbolic and vatic—rendering the best poems of her life.” —Henri Cole

“In a culture inclined to mistake opacity for depth and stridency for passionate feeling, Joanna Klink has made a body of work at once utterly lucid and breathtakingly urgent. She navigates between those most suspicious extremes, despair and ecstasy, without ever seeming to be a poet dependent on extremes.  Taken together, her books are an amazing experience: harrowing, ravishing, essential, unstoppable.” —Louise Glück, American Academy of Arts and Letters Award citation

“[Klink's] poems illuminate the membrane between loneliness and solitude.” —Terrance Hayes, author of American Sonnets for My Past and Future Assassin

“Klink writes love poems to nature . . . Walt Whitman might find something to envy in the way Klink's more gentle sense of song tumbles out of simple, individual acts of attention.” —Chicago Tribune

“[Klink's] work is a record not only of the ecstasy of engagement with the natural world, but also of the mixed and passionately felt consequences of detachment from a noisier, more chaotic world.” —Boston Review

Joanna Klink is the author of four books of poetry. She has received awards and fellowships from the Rona Jaffe Foundation, Jeannette Haien Ballard, Civitella Ranieri, the Bogliasco Foundation, the American Academy of Arts and Letters, the Trust of Amy Lowell, and the John Simon Guggenheim Memorial Foundation. She is teaching at the Michener Center in Austin.
Loading...
or support indie stores by buying on