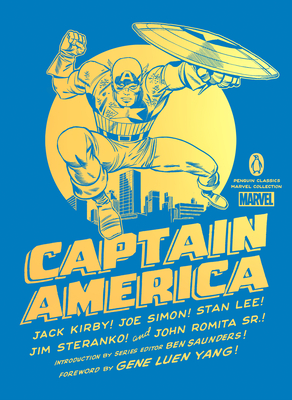 The Penguin Classics Marvel Collection presents the origin stories, seminal tales, and characters of the Marvel Universe to explore Marvel’s transformative and timeless influence on an entire genre of fantasy.

Collects Captain America Comics #1 (1941); the Captain America stories from Tales of Suspense #59, #63-68, #75-81, #92-95, #110-113 (1964-1969); “Captain America…Commie Smasher” from Captain America #78 (1954). It is impossible to imagine American popular culture without Marvel Comics. For decades, Marvel has published groundbreaking visual narratives that sustain attention on multiple levels: as metaphors for the experience of difference and otherness; as meditations on the fluid nature of identity; and as high-water marks in the artistic tradition of American cartooning, to name a few.

Drawing upon multiple comic book series, this collection includes Captain America’s very first appearances from 1941 alongside key examples of his first solo stories of the 1960s, in which Steve Rogers, the newly resurrected hero of World War II, searches to find his place in a new and unfamiliar world. As the contents reveal, the transformations of this American icon thus mark parallel transformations in the nation itself.

A foreword by Gene Luen Yang and scholarly introductions and apparatus by Ben Saunders offer further insight into the enduring significance of Captain America and classic Marvel comics.

Born Jacob Kurtzberg in 1917 to Jewish-Austrian parents on New York’s Lower East Side, Jack Kirby came of age at the birth of the American comic book industry. Horrified by the rise of Nazism, Kirby co‑created the patriotic hero Captain America with Joe Simon in 1940. Cap’s exploits on the comic book page entertained millions of American readers at home and inspired US troops fight­ing the enemy abroad. Kirby’s partnership with Simon continued throughout the 1940s and early ’50s; together, they produced com­ics in every popular genre, from Western to romance. In 1958, Kirby began his equally fruitful collaboration with writer- editor Stan Lee, and in 1961 the two men co‑created the foundational text of the modern Marvel Universe: The Fantastic Four. Over the next de­cade, Kirby and Lee would introduce a mind- boggling array of new characters— including the Avengers, the Hulk, Thor, Iron Man, the Silver Surfer, and the X‑Men. Kirby’s groundbreaking work with Lee formed the foundation of the Marvel Universe. In the early 1970s, Kirby moved to DC Comics, where he created his intercon­nected Fourth World series, as well as freestanding titles such as The Demon. He returned to Marvel in 1975, writing and illustrat­ing The Black Panther and Captain America, and introducing series such as Devil Dinosaur, and the Eternals. Kirby died in 1994. Today, he is generally regarded as one of the most important and influential creators in the history of American comics. His work has inspired multiple generations of writers, artists, designers, and film­makers, who continue to explore his vast universe of concepts and characters. He was an inaugural inductee into the Eisner Hall of Fame in 1987.

Writer-editor Stan Lee (1922–2018) and artist Jack Kirby made comic book history in 1961 with The Fantastic Four #1. The suc­cess of its new style inspired Lee and his many collaborators to de­velop a number of new super heroes, including, with Jack Kirby, the Incredible Hulk and the X‑Men; with Steve Ditko, the Amazing Spider-Man and Doctor Strange; and with Bill Everett, Daredevil. Lee oversaw the adventures of these creations for more than a de­cade before handing over the editorial reins at Marvel to others and focusing on developing Marvel’s properties in other media. For the remainder of his long life, he continued to serve as a creative figure­head at Marvel and as an ambassador for the comics medium as a whole. In his final years, Lee’s signature cameo appearances in Marvel’s films established him as one of the world’s most famous faces.

While sharing a studio with Jack Kirby, artist Joe Simon co‑created Captain America, a stirring symbol of American idealism and pride during the war-torn 1940s. Simon and Kirby would go on to form one of the most productive partnerships of the early American comic book industry. The two men co‑created comics in every genre—crime, war, horror, science fiction, Western, humor, and romance—for numerous different publishers between 1940 and 1954. Noted characters and series included the Sandman and the Newsboy Legion for DC Comics, Young Romance for Crestwood, and Boys’ Ranch for Harvey. Simon also wrote two autobiographies—The Comic Book Makers (1990), coauthored with his son, Jim Simon, and Joe Simon: My Life in Comics (2011)— essential reading for any historian of comic book history and culture.

Jim Steranko rocked the comic book world in the late 1960s with a revolutionary approach to design and narrative, influenced by the contemporary worlds of both commercial and fine art. Ster­anko produced very little comics work after the 1970s, but his illus­trations would grace the covers of numerous science fiction and fantasy novels, as well as film posters and record album sleeves. He has also produced character designs for a number of filmmakers, including George Lucas, Steven Spielberg, and Francis Ford Cop­pola. His two- volume History of Comics was one of the first modern works of comics scholarship, and his film industry magazine Prevue enjoyed an impressive twenty- five- year run. Steranko was inducted into the Eisner Hall of Fame in 2006.

John Romita Sr. was born in Brooklyn in 1930 and attended Manhattan’s School of Industrial Art before entering the comic book industry in 1949. He drew many comics for Marvel (then known as Timely or Atlas) during the early 1950s before moving to DC Comics in 1958, where he established a reputation as a master of romance comics. In 1965 he returned to Marvel, inking Don Heck’s pencils on an issue of the Avengers. After a short stint pen­ciling Daredevil, Romita Sr. was tapped by Stan Lee to take over The Amazing Spider-Man when original artist Steve Ditko left the book. Romita Sr. brought a new emotional warmth to the series, while his slick, clean craftsmanship took the title to even greater commercial heights. His renditions of the title character, as well as supporting cast members such as Gwen Stacy and Mary Jane Wat­son, were considered definitive by a generation of fans. In the 1970s, Stan Lee appointed Romita Sr. as art director for the company; while in this position, he helped design numerous characters (in­cluding the Punisher, Wolverine, and Luke Cage). He was inducted into the Eisner Hall of Fame in 2002.

Ben Saunders is a professor of English at the University of Ore­gon. He is the author of Desiring Donne: Poetry, Sexuality, Inter­pretation and Do the Gods Wear Capes?: Spirituality, Fantasy, and Superheroes, as well as numerous critical essays on subjects ranging from the writings of Shakespeare to the recordings of Little Richard. He has also curated several museum exhibitions of comics art, in­cluding the record-breaking multimedia touring show Marvel: Uni­verse of Super Heroes—a retrospective exploring the artistic and cultural impact of Marvel Comics from 1939 to the present.
Loading...
or support indie stores by buying on