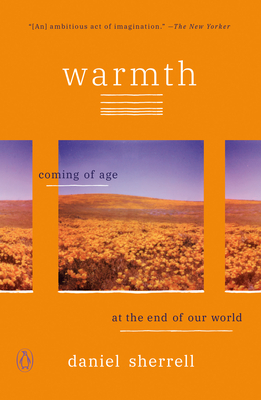 Coming of Age at the End of Our World

“[Warmth] is lyrical and erudite, engaging with science, activism, and philosophy . . . [Sherrell] captures the complicated correspondence between hope and doubt, faith and despair—the pendulum of emotional states that defines our attitude toward the future.” —The New Yorker

“Beautifully rendered and bracingly honest.” —Jenny Odell, author of How to Do Nothing

From a millennial climate activist, an exploration of how young people live in the shadow of catastrophe

Warmth is a new kind of book about climate change: not what it is or how we solve it, but how it feels to imagine a future—and a family—under its weight. In a fiercely personal account written from inside the climate movement, Sherrell lays bare how the crisis is transforming our relationships to time, to hope, and to each other. At once a memoir, a love letter, and an electric work of criticism, Warmth goes to the heart of the defining question of our time: how do we go on in a world that may not?

Praise For Warmth: Coming of Age at the End of Our World…

“[Sherrell] moves fluently among thinkers such as Bill McKibben, Saidiya Hartman, and Maggie Nelson . . . captur[ing] the complicated correspondence between hope and doubt, faith and despair . . . [Warmth is] an achievement, reflective of the serpentine struggle with self-doubt . . . speaking to an unborn child allows [Sherrell] to extend beyond his own relative comfort, and this involves its own kind of faith, a solidarity with the world to come that we won’t see . . . remind[ing] us that there will be no further salvation from afar, only a need to look harder, and closer.” —The New Yorker

“Sherrell’s diverse emotional palate may in fact reflect the ambivalence most of us feel when it comes to issues of climate change. We generally don’t think about the Problem, as Sherrell calls it, until our thoughts about it are too much to bear . . . Sherrell awakens a new urgency for reform. Our choices today have an impact on the environment in years to come, we know. But in Warmth, Sherrell makes concrete what is generally too abstract or distant for us to really feel.” —The Washington Post

“[Written] with incisive, ground-level urgency . . . Sherrell is an immensely talented young writer who cares deeply about his subject . . . Warmth should be required reading for anyone who questions the depth, tenacity, and critical thinking skills of millennials . . . Sherrell could have responded with a pure screed. Instead he’s come up with something more potent: an existential yawp, freighted with the ballast of knowledge and intent. Reading Warmth means accepting the challenge of caring, and perhaps even doing something about it.” —The Boston Globe

“[A] book that reads like a long conversation with a very thoughtful friend.” —WIRED

“Warmth is a doleful and frequently moving phenomenological account of what it means to pursue a vocation as a climate activist in a world careening from crisis to anthropogenic crisis—a blazing work of emergency ecocriticism . . . refreshingly different . . . an avowedly future-orientated work that revives climate writing.” —The Hedgehog Review

“Warmth shows us a new way to tell the story of how we might cope and survive a future of catastrophe.” —The Nation

“[Warmth] provides insight on how to navigate a world threatened by climate change—from the overwhelming anxiety it conjures to the existential quandary it wreaks.” —The Cut

“[Warmth] is a blueprint [...] for learning how a person might gain clarity on a phenomenon that is so ever-present that it is almost invisible until the waves are at your door . . . [Sherrell] lay[s] out the hypocrisy and the numbness and the despair and the hope and the uncertainty and the culpability—all the mess of trying to live simultaneously within and outside of the Problem—and ask[s] an altogether new question: What now? Warmth is delicate at times, brutal at others, but it is always thoughtfully rendered, and often beautifully so.” —The Colorado Review

“Sherrell brilliantly balances despair and hope in his searing debut . . . [with] nuanced reflections on how a caring and thoughtful person should respond to climate change . . . This indelible, necessary work makes a global issue deeply personal.” —Publishers Weekly (starred review)

“[An] eerie and gorgeous book . . . [Warmth] will validate the fears, grief, and nostalgia that readers of any generation feel about the future of our planet. There is much collective comfort to be found while naming the specifics of such an overwhelming topic, and Sherrell offers that comfort generously on every page.” —Booklist (starred review)

“[Sherrell] writes with clarity and emotion . . . a compelling, urgent work . . . This is the type of coming-of-age book one must read in order to understand what it means to live with clear-eyed awareness of the climate disaster while also continuing to move forward . . . Brave, honest, and bold, Sherrell’s book is neither blithely optimistic nor fatalistic and instead shows how readers can respond to climate change with circumspection. It should be read alongside the work of climate activists like Greta Thunberg and Jamie Margolin.” —Library Journal (starred review)

“Sherrell is a passionate advocate for the climate movement, which he conveys with urgency and honest, raw emotion, expressing an anxiety he feels has infiltrated the essence of his being. He writes with a frightening sense of gravity . . . Warmth is a pleading, informative call to action.” —BookPage

“Sherrell's strikingly perceptive book is neither a prescription for hope or for despair, but a call for a clear-eyed examination of one of the most pressing questions of our time—what do we owe the next generation?” —Jenny Offill, New York Times bestselling author of Weather and Dept. of Speculation

“Beautifully rendered and bracingly honest, this book helped me do the impossible: live in the space between grief and hope.” —Jenny Odell, New York Times bestselling author of How to Do Nothing

“Searchingly honest, this fine book is the work of someone actively engaged in the most important fight of our time (maybe of all time), and also of a writer able to establish the necessary distance. Dan Sherrell is smart, obviously, but he's also something much more important: open, vulnerable, able to face fully that which we all must grapple with in this overheating century.” —Bill McKibben, New York Times bestselling author of Falter

“In this insider account of the struggle for the earth against the forces of corporate greed that threaten it, Daniel Sherrell has written a tender letter to the uncertain future—at once intimate and angry, exasperated and brave.” —Anne Boyer, Pulitzer Prize-winning author of The Undying

“Warmth is a moving, beautifully written memoir of an activist's coming-of-age in this era of climate disruption. It is also a powerful and profound meditation on writing, language and story-telling, and their relationship to politics and activism.” —Amitav Ghosh, author of The Great Derangement: Climate Change and the Unthinkable

“Little has been written that so vividly captures what it is like to be young and so-very-much alive in the wealthiest nation in the world as it comes undone. Daniel Sherrell’s Warmth is a groundbreaking work that illustrates how to fight—emotionally, intellectually, physically, with all one’s might—for a future worth inhabiting.” —Elizabeth Rush, author of Rising: Dispatches from the New American Shore

“An urgent cri de coeur from a passionate and clear-eyed new talent.” —Kim Stanley Robinson, New York Times bestselling author of The Ministry for the Future

“[Warmth] speaks powerfully to all generations . . . Impassioned, conflicted, dogged, poetic, hugely intelligent, Warmth is a personal meditation on how to act and grieve at the same time, how to keep faith and fight for the future as you watch it disappear.” —Kim Mahood, author of Position Doubtful

“By speaking directly to the future [...] Sherrell manages the neat trick of imagining how we might get there with our wits and hopes intact.” —Peter Friederici, author of Beyond Climate Breakdown

Daniel Sherrell is an organizer born in 1990. He helped lead the campaign to pass landmark climate justice legislation in New York and is the recipient of a Fulbright grant in creative nonfiction. Warmth is his first book.
Loading...
or support indie stores by buying on