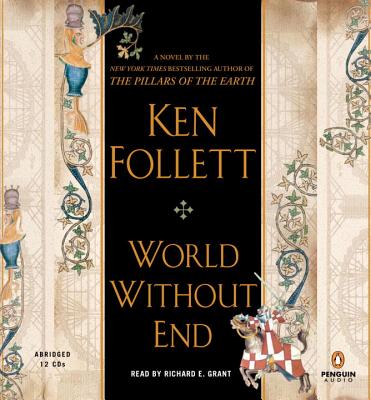 Make this your next book club selection and everyone saves.
Get 15% off when you order 5 or more of this title for your book club.
Simply enter the coupon code FOLLETPILLARS at checkout.
This offer does not apply to eBook purchases. This offer applies to only one downloadable audio per purchase.

Praise For World Without End (Kingsbridge #2)…

“[A] well-researched, beautifully detailed portrait of the late Middle Ages . . . Follett’s no-frills prose does its job, getting smoothly through more than a thousand pages of outlaws, war, death, sex, and politics to end with an edifice that is as well constructed and solid as Merthin’s bridge.” —The Washington Post

“Follett tells a story that runs the gamut of life in the Middle Ages, and he does so in such a way that we are not only captivated but also educated. What else could you ask for?” —The Denver Post

“So if historical fiction is your meat, here’s a rare treat. A feast of conflicts and struggles among religious authority, royal governance, the powerful unions (or guilds) of the day, and the peasantry . . . With World Without End, Follett proves his Pillars may be a rarity, but it wasn’t a fluke.” —New York Post

“A work that stands as something of a triumph of industry and professionalism.”—The Guardian (UK)

“The four well-drawn central characters will captivate readers as they prove to be heroic, depraved, resourceful, or mean. Fans of Follett’s previous medieval epic will be well rewarded.” —The Union (CA)

“Populated with an immense cast of truly remarkable characters . . . this is not a book to be devoured in one sitting, tempting though that might be, but one to savor for its drama, depth, and richness.” —Library Journal

“Readers will be captivated.” —Publishers Weekly

Ken Follett is the author of twenty bestselling books, from the groundbreaking Eye of the Needle to, most recently, Fall of Giants, Whiteout, and Hornet Flight. He lives in England with his wife, Barbara Follett. Visit Ken's official website at www.ken-follett.com.
Loading...
or support indie stores by buying on
(This book is on backorder)