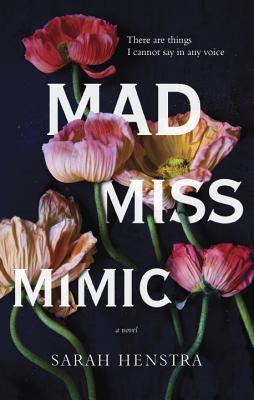 
Born into an affluent family, Leo outwardly seems like a typical daughter of English privilege in the 1870s: she lives with her wealthy married sister Christabel, and lacks for neither dresses nor trinkets. But Leo has a crippling speech impediment that makes it difficult for her to speak but curiously allows her to mimic other people's voices flawlessly. Servants and ladies alike call her "Mad Miss Mimic" behind her back... and watch as she unintentionally scares off every potential suitor. Only the impossibly handsome Mr. Thornfax seems interested in Leo...but why? And does he have a connection to the mysterious Black Glove group that has London in its terrifying grasp? Trapped in a city under siege by terror attacks and gripped by opium fever, where doctors (including her brother-in-law) race to patent an injectable formula, Leo must search for truth in increasingly dangerous situations - but to do so, she must first find her voice.

"A complex plot that reads like a combination of Austen and Conan Doyle." --Quill and Quire

"This is the perfect beach read for that teen who got an A in History (and would rather stay inside watching Downton Abbey than go to the beach in the first place)." --The Globe and Mail

"[I]f Mad Miss Mimic is an indicator of what's in young readers' hands - and you don't have to be in that demographic to enjoy it - the future looks good." --NOW Magazine

"[A]nother historical-fiction tale of a headstrong heroine who refuses to accept her circumstances passively." --Booklist

Sarah Henstra is a professor of English at Ryerson University, where she teaches courses in Gothic Literature, Fairy Tales & Fantasy, and Women in Fiction. Some of her best story ideas come from class discussions. She lives in Toronto with her husband, two sons, and a poodle named Nora. Mad Miss Mimic is her first novel.
or
Not Currently Available for Direct Purchase