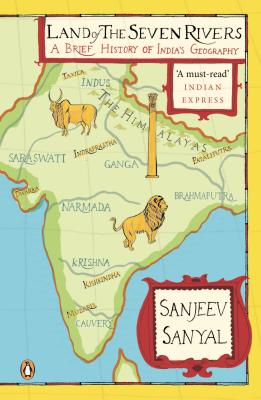 Land of the Seven Rivers (Paperback)

A Brief History of India's Geography

Did ancient India witness the Great Flood? Why did the Buddha give his first sermon at Sarnath? How did the Europeans map India?
Combining scholarship with sparkling wit, Sanjeev Sanyal sets out to explore how India's history was shaped by its geography--answering questions you may have never thought to ask. Moving from geological and genetic origins to present-day Gurgaon, "Land of the Seven Rivers "is riveting, wry and full of surprises.

Currently the global strategist of one of the world's largest banks, Sanjeev Sanyal divides his time between India and Singapore. A Rhodes Scholar and an Eisenhower Fellow, he was named Young Global Leader for 2010 by the World Economic Forum. He has written extensively on economics, enviornmental conversation and urban issues, and his first book, "The Indian Renaissance: India's Rise After a Thousand Years of Decline, "was published by Penguin in 2008.
or
Not Currently Available for Direct Purchase
Copyright © 2020 American Booksellers Association