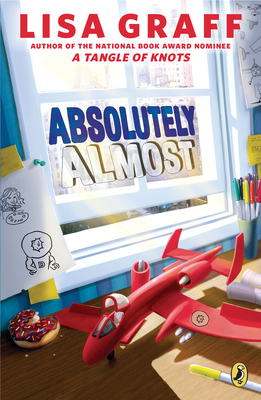 From the author of the National Book Award nominee A TANGLE OF KNOTS comes an inspiring novel about figuring out who you are and doing what you love.

A perfect companion to Lisa Graff's National Book Award-nominated A Tangle of Knots, this novel explores a similar theme in a realistic contemporary world where kids will easily be able to relate their own struggles to Albie's. Great for fans of Rebecca Stead's Liar and Spy, RJ Palacio's Wonder and Cynthia Lord's Rules.

Tangle of Knots (nominated for a National Book Award)
* "Combining the literary sensibility of E. B. White with the insouciance of Louis Sachar, Graff has written a tangle that should satisfy readers for years to come."--Booklist, starred review

Double Dog Dare
"Graff's...story is lighthearted and humorous, but honestly addresses the emotions associated with divorce. Her characters' voices, interactions, and hangups are relatable, as they battle each other and adjust to their families' reconfigurations."--Publishers Weekly

" Graff’s gentle story invokes evergreen themes of coming to appreciate one’s strengths (and weaknesses), and stands out for its thoughtful, moving portrait of a boy who learns to keep moving forward, taking on the world at his own speed.” – Publishers Weekly, starred review

“Beautifully written, Albie’s story is accessible and dignified, with a gentle message that will touch any reader’s heart. Middle-grade readers will love the references to Dav Pilkey’s inexhaustibly popular Captain Underpants series, which has introduced so many children to the fun side of reading. A perfect book to share with struggling readers.” - Booklist, starred review

Lisa Graff is the National Book Award nominated author of A Tangle of Knots, Double Dog Dare, Umbrella Summer, The Life and Crimes of Bernetta Wallflower,The Thing About Georgie and Sophie Simon Solves Them All. Originally from California, she lived for many years in New York City and now makes her home just outside of Philadelphia. You can visit her online at www.lisagraff.com or follow her on Twitter @lisagraff.
Loading...
or support indie stores by buying on
(This book is on backorder)