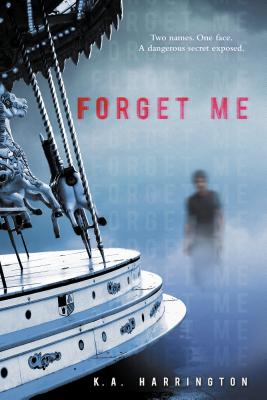 "From Facebook to YA book: K.A. Harrington’s Forget Me is a psychological thriller inspired by Facebook’s facial recognition software."--Entertainment Weekly

Morgan never minded her boyfriend Flynn’s dark and private nature. She found it mysterious and alluring. But now he’s dead, and she can’t move on. She feels much like her dying town, River’s End, with its overgrown amusement park and abandoned houses: once happy . . . now fading away.

Hoping for some closure, Morgan uploads her only picture of Flynn to the social media site FriendShare along with a note to say good-bye. But she’s shocked when the facial recognition software suggests she tag him as Evan Murphy. She’s never heard of Evan. A quick search reveals that he lives in a nearby town and looks exactly like Flynn. Same eyes, nose, jawline. Only this boy is very much alive. Digging through layers of secrets, Morgan questions everything she thought she knew about her town, her boyfriend, and even her parents’ involvement in this massive web of lies.

Praise For Forget Me…

Praise for Forget Me

"The teen’s likable, tenacious character and the story’s Hollywood-like ending keep this debut on the lighter side, making it just right for late-summer beach reading."--Kirkus Reviews

"Harrington unfurls another gripping whodunit that will keep readers guessing . . . Thanks to Harrington’s ability to weave suspenseful yet believable stories full of hidden clues and false leads, what the teenagers uncover about Flynn’s death goes beyond what most readers will see coming. As in her previous novels, Harrington’s fully defined characters and vivid settings set the stage for a riveting read."--Publishers Weekly

"This mystery takes many unexpected twists and turns . . . Corporate misbehavior, economic downturns, and whistle-blowing are not the usual in young adult books, but Harrington makes them relevant to teen readers."--VOYA

K.A. Harrington is the pen name of Kim Harrington, author of several paranormal / horror books. This is her first psychological thriller and her first time writing under the name K.A. Harrington. When not writing, you can probably find her reading, watching one of her favorite TV shows, or fantasizing about her next vacation. She lives in Massachusetts with her husband and son.
Loading...
or
Not Currently Available for Direct Purchase