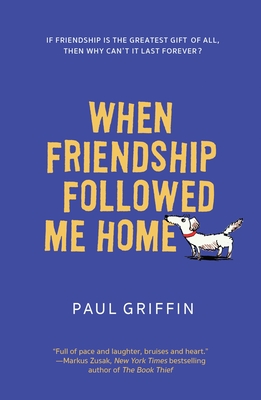 When Friendship Followed Me Home

"If you have middle schoolers who are too young to fully grasp John Green’s The Fault in Our Stars and love dogs, give them this sweet tearjerker." — School Library Journal

"In this beguiling tearjerker, a foster kid's luck slowly changes after he befriends a scruffy pup he finds outside the library."--People magazine

Ben Coffin has never been one for making friends. As a former foster kid, he knows people can up and leave without so much as a goodbye. Ben prefers to spend his time with the characters in his favorite sci-fi books…until he rescues an abandoned mutt from the alley next-door to the Coney Island Library. Scruffy little Flip leads Ben to befriend a fellow book-lover named Halley—yes, like the comet—a girl unlike anyone he has ever met. Ben begins thinking of her as “Rainbow Girl” because of her crazy-colored clothes and her laugh, pure magic, the kind that makes you smile away the stormiest day.  Rainbow Girl convinces Ben to write a novel with her.  But as their story unfolds Ben’s life begins to unravel, and Ben must discover for himself the truth about friendship and the meaning of home.

Praise For When Friendship Followed Me Home…

"[T]his bittersweet, well-paced book…left me with faith that people can feel discarded, as though everything they love will be taken from them, and still end up whole, if they are touched by love of friendship." — The New York Times Book Review

"Griffin writes beautifully about family, friendship, belonging, and loss in a story that is sure to leave every reader with at least a tear in his or her eye, if not a pile of soggy tissues."--Examiner

"If you have middle schoolers who are too young to fully grasp John Green’s The Fault in Our Stars and love dogs, give them this sweet tearjerker." — School Library Journal

"The dialogue between Ben and Halley is snappy and smart (think John Green for middle-graders), and the sci-fi story the two friends write together reveals the emotions behind their wit."--BCCB

"Full of pace and laughter, bruises and heart. Paul Griffin is the sort of writer you're torn between telling the whole world about and keeping all to yourself."—Markus Zusak, author of Printz Honor Winner The Book Thief

“‘Friendship’ is an absolutely beautiful, heart-expanding book.  I cried, but more than that I felt this giant balloon of love for everyone.  This story convinced me all over again that love and imagination are life’s biggest magic. It’ll make you want to grab hold of everyone important to you and lick them on the nose.”   —Rebecca Stead, author of Newbery Award winner When You Reach Me

"When Friendship Followed Me Home is both a beautiful book, and an honest book; it is, in fact, beautiful because it is honest. We see the pain of loss, and the glory of community. We see love in its many forms, and we witness the truth that love goes on despite all barriers. Cheer for Ben and Halley: it is kids like these who are our hope.”  —Gary D. Schmidt, author of Okay for Now

* "As in his young adult books, Griffin (Adrift) handles hard topics with penetrating insight and honesty, while balancing painful moments (and there are many) with levity." — Publishers Weekly, starred review

"This is a multi-tissue read...Griffin’s characters are unique and charmingly multidimensional. Readerslooking for a deep read will take to this story as quickly as Flip takes to Ben." — Booklist

Paul Griffin is the award-winning author of Ten Mile River, The Orange Houses, Stay With Me, and Burning Blue. He lives, trains dogs, and writes in New York City.
Loading...
or
Not Currently Available for Direct Purchase