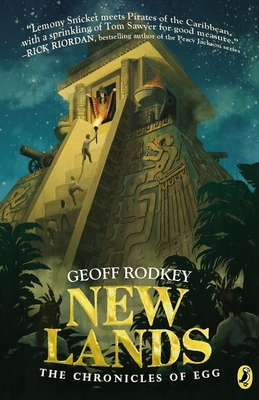 New Lands (The Chronicles of Egg #2)

“Lemony Snicket meets Pirates of the Caribbean, with a sprinkling of Tom Sawyer for good measure.”—Rick Riordan, bestselling author

After a narrow escape from Deadweather Island, Egg and his slightly deranged partner Guts head for the remote New Lands. They’re in search of the lost Okalu tribe, who hold the key to the mysterious treasure map that Egg can't decipher. But the ruthless Roger Pembroke is hard on Egg's trail, and the New Lands are full of new enemies—against which our heroes' only weapons are their brains, their courage...and the two dozen swear words Guts just memorized in the local tongue.

They're going to need help. But who can they trust? Is Kira, the beautiful and heavily armed Okalu refugee, their ally…or their enemy? Is Pembroke's daughter Millicent on Egg's side…or her father's? Why on earth is the notorious pirate Burn Healy being so nice to them? And the biggest question of all: what shocking secret is Egg about to discover in the shadow of an ancient Okalu temple?


Praise For New Lands (The Chronicles of Egg #2)…

"The plot follows a classic adventure arc but remains nonetheless surprising: the characters never quite behave in expected ways . . . Even though the world is fictional, the portrayal of the Native tribes and their culture and interactions with Egg and Pembroke may make for some interesting comparisons to Robinson Crusoe and Treasure Island. Fans of Egg will be glad for the sequel and anxious for the concluding installment."--BCCB

"The second installment of the Chronicles of Egg delivers more danger, diabolical plots and dastardly villains than the first, and that’s saying a lot . . .  Egg’s narration, fresh and funny as ever, keeps readers engaged with the increasingly complicated plot. Occasionally gruesome, often funny and full of suspense, this one is sure to win Egg some new fans."--Kirkus Reviews

Geoff Rodkey (www.chroniclesofegg.com) is the Emmy-nominated writer of such hit films as Daddy Day Care, RV, and the Disney Channel's Good Luck Charlie, It's Christmas. He grew up in Freeport, Illinois and began his writing career on his high school newspaper. His early writing credits include the educational video game Where In the World Is Carmen Sandiego? and the non-educational MTV series Beavis and Butthead. Geoff currently lives in New York City with his wife and three sons. They do not have any pets, mostly because the whole experience with the goldfish was just too upsetting.
Loading...
or support indie stores by buying on