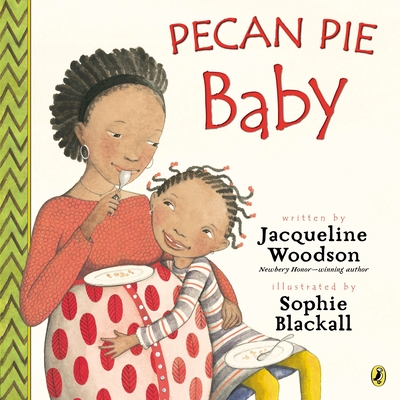 All anyone wants to talk about with Mama is the new “ding-dang baby” that’s on the way, and Gia is getting sick of it! If her new sibling is already such a big deal, what’s going to happen to Gia’s nice, cozy life with Mama once the baby is born?

“[An] honest story about jealousy, anger, displacement, and love [that] will touch kids dealing with sibling rivalry and spark their talk about change.”—Booklist

* “Gia’s narrative voice is prime Woodson—lyrical, colloquial, and imbued with the authentic feelings of a child.”—The Horn Book, starred review

Sophie Blackall (www.sophieblackall.com) is the illustrator of several award-winning picture books, including Meet Wild Boars by Meg Rosoff, Big Red Lollipop (by Rukhsana Khan), and the Ivy and Bean books by Annie Barrows, and she wrote and illustrated The Baby Tree. Her many honors include a BCCB Blue Ribbon, Ezra Jack Keats New Illustrator Award, Society of Illustrators Founders Award, Publishers Weekly Best Children’s Book, Book Sense 76 Pick, and New York Times Top Ten Picture Book. Her artwork has also appeared in murals as part of the New York City MTA’s “Arts for Transit” program. Previously she has had jobs in a shoe shop and a robot factory. She lives in Brooklyn, New York.
Loading...
or support indie stores by buying on