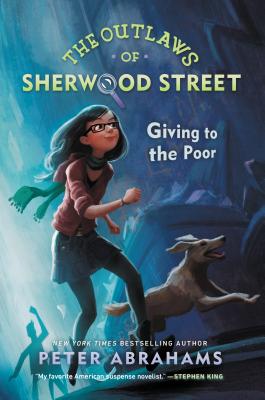 Giving to the Poor (Paperback)

A modern-day Robin Hood by a New York Times bestselling and Edgar Award-winning author
Life isn't fair. But Robbie Forester and her friends want to change that by fighting injustice. When evil businessman Sheldon Gunn ends up killing Silas's father, the Outlaws know it's up to them to make him pay. With street smarts, Silas's inventions, and a little help from a charm bracelet, these friends know they can take on Sheldon Gunn and win at least, they hope so. If they can t, they might end up just like Silas's dad.
The Outlaws of Sherwood Street: Giving to the Poor is perfect for fans of young detectives like Nancy Drew, Enola Holmes, and Gilda Joyce.

Peter Abrahams is one of those writers you tell your friends about. The Washington Post

Peter Abrahams, who also writes under the pen name Spencer Quinn, is a New York Times bestselling and Edgar Award-winning author of mysteries for children and for adults. He lives in Falmouth, Massachusettswith his wife and two dogs, and tries to entice his four grown children to visit as often as possible."

Praise For Giving to the Poor…

Praise for The Outlaws of Sherwood Street: Giving to the Poor:

"A fast-paced ride that should appeal to both boys and girls." —Kirkus Reviews

"[Abrahams] is at his best with these friends, remarkably well-drawn individuals whose honest interactions and sharp, authentic dialogue give the outing real emotional resonance." —Booklist