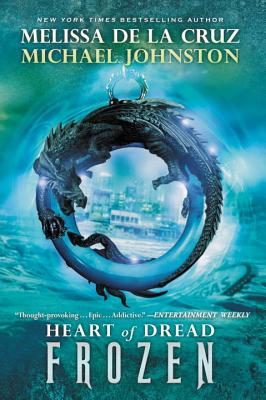 Heart of Dread, Book One

From the New York Times bestselling author of Blue Bloods and Isle of the Lost (a Disney Decendants novel) the first book in a spellbinding new series about the dawn of a new kind of magic.

Welcome to New Vegas, a city once covered in bling, now blanketed in ice. Like much of the destroyed planet, the place knows only one temperature—freezing. But some things never change. The diamond in the ice desert is still a 24-hour hedonistic playground and nothing keeps the crowds away from the casino floors, never mind the rumors about sinister sorcery in its shadows.

At the heart of this city is Natasha Kestal, a young blackjack dealer looking for a way out. Like many, she's heard of a mythical land simply called “the Blue.” They say it’s a paradise, where the sun still shines and the waters are turquoise. More importantly, it’s a place where Nat won’t be persecuted, even if her darkest secret comes to light.

But passage to the Blue is treacherous, if not impossible, and her only shot is to bet on a ragtag crew of mercenaries led by a cocky runner named Ryan Wesson to take her there. Danger and deceit await on every corner, even as Nat and Wes find themselves inexorably drawn to each other. But can true love survive the lies? Fiery hearts collide in this fantastic tale of the evil men do and the awesome power within us all.

“The mix of adventure and fantasy will have you addicted!”
—Seventeen.com

“A one-sitting read. The world-building in Frozen is absolutely addictive. You'll really feel like you're traveling through this frozen, post-apocalyptic country (with) the setting, the realistic characters and the fast pace.”
—Romantic Times

“Fans of The Hunger Games will no doubt enjoy sinking their teeth into this exciting book.”
—SLJ

Praise For Frozen: Heart of Dread, Book One…

“The mix of adventure and fantasy will have you addicted!”—Seventeen.com

“A one-sitting read. The world-building in Frozen is absolutely addictive. You'll really feel like you're traveling through this frozen, post-apocalyptic country (with) the setting, the realistic characters and the fast pace.”—Romantic Times
“The well-paced action is taut, the characters diverse and finely drawn. And while this is a multiple book series, the ending of this first story is fully satisfying and doesn't leave the reader dangling until the sequel comes out.”—New York Journal of Books

“Fans of The Hunger Games will no doubt enjoy sinking their teeth into this exciting book.”
—School Library Journal

“De la Cruz and Johnston score a hit. The action soon accelerates and readers will find themselves completely immersed in the authors’ dangerous world. Lots of fun.”
—Kirkus Reviews

Melissa de la Cruz is the New York Times, USA Today, Wall Street Journal, Los Angeles Times and Publisher's Weekly internationally best­selling author of many critically acclaimed novels, including Isle of the Lost, a Disney Decendants novel. Her Blue Bloods series has sold over three million copies and the Witches of East End series is now an hour-long television drama on the Lifetime network. Visit her online at www.melissa-delacruz.com.

Michael Johnston is Melissa’s husband and heretofore “si­lent partner.” He is co-creator of the Blue Bloods and Witches of East End series. Melissa and Michael live with their daughter in Los Angeles and Palm Springs, California.
Loading...
or
Not Currently Available for Direct Purchase