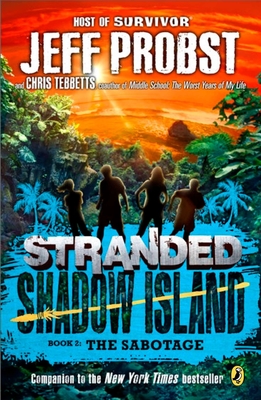 Book Two in the STRANDED: SHADOW ISLAND trilogy--Companion series to the New York Times bestselling STRANDED adventures!
As seen on The Today Show, Rachael Ray, and Kelly and Michael.
From the Emmy-Award winning host of Survivor, Jeff Probst, with Middle School: The Worst Years of My Life co-author Chris Tebbetts
The 2nd brand new adventure following the characters from the original STRANDED family adventure trilogy!

How much would you sacrifice?  How far could you go?
When Carter, Vanessa, Buzz, and Jane found themselves stranded on Shadow Island, they had no idea what they were getting into.  Now, one of their group is missing, and the stakes just keep getting higher.  This is going to be a fight to the finish if they ever want to make it home again.  It’s going to take courage. It’s going to take strength.  It’s going to take luck.  And in the end, one rash decision could change everything—when everything is at stake.

The second book of a companion arc to the STRANDED series (New York Times bestseller STRANDED, TRIAL BY FIRE, and SURVIORS)!As seen on The Today Show, Rachael Ray, and Kelly and Michael."Stranded is non-stop adventure! If your kids love Survivor, they'll love this book!"—Mark Burnett, Executive Producer of Survivor, The Voice, Shark Tank, and Celebrity Apprentice "An epic adventure for that young adventurer in us all!"—Bear Grylls, host of Discovery's Man vs Wild, NBC's Get Out Alive and #1 bestselling author

Jeff Probst is the multi-Emmy award winning host and executive producer of the popular series Survivor. A native of Wichita, Kan., Probst is married and lives in Los Angeles with his wife and 2 children when not traveling the world. He can be followed on twitter @jeffprobst and online at www.jeffprobst.com