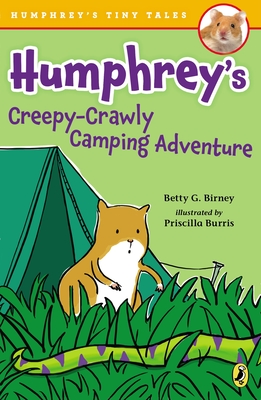 Humphrey has had lots of adventures as the classroom pet of Room 26, but never one like this. He is going on a campout in the backyard with Heidi and her friends! There’s stargazing, roasting marshmallows, searching for creepy-crawlies—and then there are the prank-loving boys next door, who want to prove that the girls are scaredy-cats.

“Small but mighty, Humphrey is an endearing and earnest narrator whose gentle but on-the-nose observations will resonate with budding readers.”—School Library Journal

Betty G. Birney has won many awards for writing for television, including an Emmy, three Humanitas Prizes, and a Writers Guild of America Award, and she won the Christopher Award for Friendship According to Humphrey. In addition to the Humphrey series, she is the author of The Seven Wonders of Sassafrass Springs and The Princess and the Peabody's. She grew up in St. Louis, Missouri, where her parents grew up as neighbors on Humphrey Street.

Priscilla Burris graduated from The Fashion Institute of Design & Merchandising. Since then, she's illustrated several children's books.
Loading...
or support indie stores by buying on