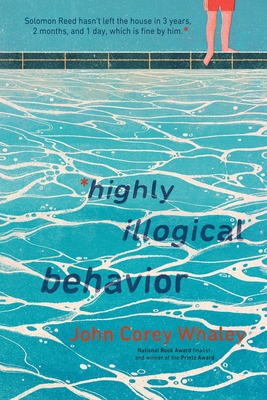 From a Printz and Morris Award-winning author comes a quirky story of coming-of-age, coming out, friendship, love...and agoraphobia.

Sixteen-year-old Solomon has agoraphobia. He hasn't left his house in 3 years. Ambitious Lisa is desperate to get into a top-tier psychology program. And so when Lisa learns about Solomon, she decides to befriend him, cure him, and then write about it for her college application. To earn Solomon's trust, she introduces him to her boyfriend Clark, and starts to reveal her own secrets. But what started as an experiment leads to a real friendship, with all three growing close. But when the truth comes out, what erupts could destroy them all. Funny and heartwarming, Highly Illogical Behavior is a fascinating exploration of what makes us tick, and how the connections between us may be the most important things of all.

John Corey Whaley's first novel, Where Things Come Back, was the winner of the 2012 Printz Award and the 2012 Morris Award. His second novel, Noggin, was a 2014 National Book Award finalist. He lives in Little Rock, Arkansas.
Loading...
or support indie stores by buying on