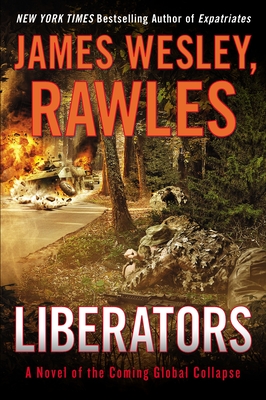 A Novel of the Coming Global Collapse (Coming Collapse Series)

New York Times bestselling author James Wesley, Rawles has won a large readership among the growing ranks of survivalists and preppers with novels that combine fast-paced adventure with useful how-to information. Set against a backdrop of global socioeconomic collapse, Liberators features Afghanistan War vet Ray McGregor and Phil Adams, a Defense Intelligence Agency officer. When the United States is engulfed by chaos, a tyrannical army of occupation ruthlessly restores order. Operating out of a sparsely populated town in remote western Canada, the two men fight the occupiers to ensure not only their own survival, but also the future of North America.

Praise For Liberators: A Novel of the Coming Global Collapse (Coming Collapse Series)…

“[A]nother entertaining and thought-provoking novel, describing steps people can take in the event of a global collapse.”
--The Huffington Post

“Rawles' Survivors is well worth reading. . . well-written and informative, and speaks with an honesty and bluntness often missing from the policy prognotications of the political elite.” – The New American

"A wonderful work of fiction" –Alphecca

“Rawles’ latest novel, set during a future global collapse, features characters in different parts of the world coping with life stripped of modern conveniences and technology... readers [can] jump into the beginning of the end at any point. For dystopia and action fans.” –Booklist

“Meticulously researched with a wealth of local and technical details.” –Fourmilog

“As with all of Rawles’ books, you get a lot of knowledge of survival stuff and [Expatriates] is no different.  He tells you why, how, and what product they used which is very helpful to other survivalists.” –Space Coast Preppers

“Expatriates is a very entertaining read, especially in perilous times like these.” –Western Courier

James Wesley, Rawles is a former U.S. Army intelligence officer who held top security clearance. He lives in an undisclosed location west of the Rockies.
Loading...
or
Not Currently Available for Direct Purchase