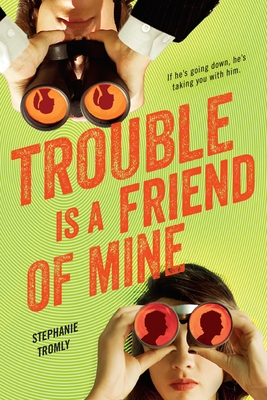 Trouble Is a Friend of Mine

Sherlock meets Veronica Mars meets Riverdale in this romance where the leading man is decidedly unromantic, and crime novel where catching the crook isn't the only hook.


Of course Zoe Webster didn't like Philip Digby when she first met him. No one does! He's rude and he treats her like a book he's already read and knows the ending to. But Zoe is new in town and her options for friends are . . . limited. And before she knows it, Digby--annoying, brilliant, and somehow attractive?--has dragged her into a series of hilarious and dangerous situations all related to the investigation of a missing local teen girl. When it comes to Digby, Zoe just can't say no. But is Digby's manic quest really worth all the trouble he's getting Zoe into?


Praise For Trouble Is a Friend of Mine…

Stephanie Tromly was born in Manila, grew up in Hong Kong, graduated from the University of Pennsylvania, and worked as a screenwriter in Los Angeles. She is the author of Trouble is a Friend of Mine and lives in Winnipeg with her husband and young son.
Loading...
or support indie stores by buying on