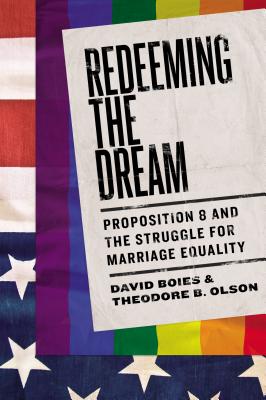 Proposition 8 and the Struggle for Marriage Equality

When advocates for marriage equality sought to challenge California’s notorious Proposition 8, they were fortunate to have the support of two of the nation’s preeminent lawyers, David Boies and Theodore B. Olson. Despite the fact that they had argued against one another in the landmark Bush v. Gore case, their commitment to the marriage issue led them to join forces, ultimately defeating the unconstitutional proposition in the Supreme Court after a nearly five-year battle. Redeeming the Dream is the definitive inside account of the key civil rights struggle of our time.

Praise For Redeeming the Dream: Proposition 8 and the Struggle for Marriage Equality…

"A carefully crafted, high accessibly play-by-play of the complex four-and-a-half year legal battle over the gay and lesbian right to marry. . . . Their clear explanations about the landmark case and the judicial process in general will leave readers well-prepared to follow the subtleties of the discussion as individual states take on the gay marriage issue."—Publishers Weekly (Starred Review)

“A triumphant look at the journey of the fight for marriage equality in the Proposition 8 challenge that went to the Supreme Court."—Jonathan Cape-Hart, The American Prospect

“An excellent, timely account of the legal struggles to attain fundamental rights; certain to appeal to readers of Jo Becker's Forcing the Spring: Inside the Fight for Marriage Equality and Evan Wolfson's Why Marriage Matters: America, Equality and Gay People's Right To Marry.”—Lynne Maxwell, Library Journal Reviews

Theodore B. Olson is a partner at Gibson, Dunn & Crutcher in Washington, D.C., where he also lives.
Loading...
or
Not Currently Available for Direct Purchase