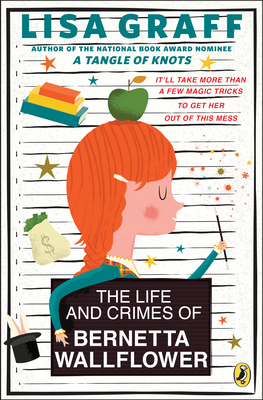 From the critically acclaimed author of A Tangle of Knots comes a humorous story full of heart, courage and a touch of magic.

Bernetta’s summer couldn’t be going any worse.First her ex-best friend frames her for starting a cheating ring in their private school that causes Bernetta to lose her scholarship for 7th grade. Even worse, Bernetta’s parents don’t believe she’s innocent, and forbid her from performing at her father’s magic club. Now Bernetta must take immediate action if she hopes to raise $9,000 for tuition.  But that’s a near impossible task with only three months until school. Enter Gabe, a boy con-artist who’s willing to team up with Bernetta to raise the money. But only if she’s willing to use her talent for magic to scheme her way to success.

Praise For The Life and Crimes of Bernetta Wallflower…

Praise for The Life and Crimes of Bernetta Wallflower

"This is an entertaining and offbeat outing, following cinematic convention . . . escalating things with cons within cons and subsequent counter-cons . . . [Readers will] relish the twists and turns."--The Bulletin for the Center of Children's Books

"The details of the different scams are fascinating . . . Graff has created an original, dimensional heroine in Bernetta."--Booklist

"The characters are well drawn, and Bernetta's growing qualms of conscience are believable. Readers will appreciate the well-constructed plot and intriguing snippets of magic slipped in here and there."--School  LIbrary Journal

"Graff successfully diverts the reader's attention in order to spring several surprises along the way while still making Bernetta a genuine and likable character."--The Horn Book

Lisa Graff is the author of Absolutely Almost, A Tangle of Knots, Double Dog Dare, Umbrella Summer, The Life and Crimes of Bernetta Wallflower, The Thing About Georgie and Sophie Simon Solves Them All. A former children's book editor, she's now a full-time writer and adjunct professor. Originally from California, she lived for many years in New York City and now makes her home just outside of Philadelphia. You can visit her online at www.lisagraff.com.
Loading...
or
Not Currently Available for Direct Purchase