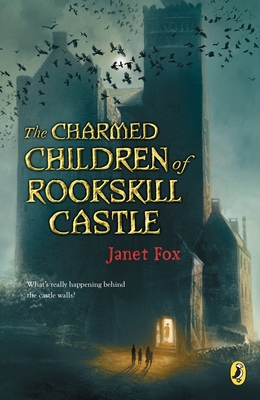 The Charmed Children of Rookskill Castle

“An enchanting, ghostly story that had me in its grip until the last page."—Jennifer A. Nielsen, New York Times and USA Today best-selling author of The False Prince

“Keep calm and carry on.”  That’s what Katherine Bateson’s father told her, and that’s what she’s trying to do:  when her father goes off to the war, when her mother sends Kat and her brother and sister away from London to escape the incessant bombing, even when the children arrive at Rookskill Castle, an ancient, crumbling manor on the misty Scottish highlands.

But it’s hard to keep calm in the strange castle that seems haunted by ghosts or worse.  What’s making those terrifying screeches and groans at night?  Why do the castle’s walls seem to have a mind of their own?  And why do people seem to mysteriously appear and disappear?

Kat believes she knows the answer: Lady Eleanor, who rules Rookskill Castle, is harboring a Nazi spy. But when her classmates begin to vanish, one by one, Kat must uncover the truth about what the castle actually harbors—and who Lady Eleanor really is—before it's too late.

Praise For The Charmed Children of Rookskill Castle…

RAVES FOR THE CHARMED CHILDREN OF ROOKSKILL CASTLE:

* “Wonderfully written . . . Readers will curl up and keep the lights on with this chilling page-turner.”—Booklist, starred review

* “In this intricately plotted thriller . . . . True-to-life protagonists, the skillful interweaving of flashbacks and the chatelaine motif, a masterful final encounter, and a satisfying denouement attest to Fox’s craftsmanship.”—Publishers Weekly, starred review

* “ Fox works a spell of her own, pulling her audience deep into the increasingly nightmarish tale, while creating a stout-hearted heroine who isn't afraid to trust her own mind.”—Shelf Awareness, starred review

“Fox’s story of intrigue and magic is enticing from page one . . . a fascinating and wonderful read.” —VOYA

“[A] cleverly-crafted thriller . . . readers who enjoy historical fiction, science fiction, or horror will not want to miss this book!”—School Library Connections

“An enchanting, ghostly story that had me in its grip until the last page. With her courage, strength, and intelligence, Kat Bateson will become one of the great literary heroines. I rooted for her right through the last page.”
—Jennifer A. Nielsen, New York Times and USA Today best-selling author of The False Prince

“Chilling, creepy, charming . . . a delicious read, full of twists and turns and writing that soars right along with the rooks outside the castle walls.”
—Kathi Appelt, Newbery Honor-winning author

“Fiendishly addicting, with as many twists and turns as the sinister castle that conceals the charmed children and the chilling evil that first ensnared them.”
—Julie Berry, award-winning author of The Scandalous Sisterhood of Prickwillow Place

Janet Fox writes award-winning fiction and non-fiction for children of all ages. Her young adult debut novel, Faithful, was an Amelia Bloomer List pick, and was followed by a companion novel, Forgiven, a Junior Library Guild selection and WILLA Literary Award Finalist, and Sirens. Janet is a 2010 graduate of the MFA/Writing for Children and Young Adults program at Vermont College of Fine Arts, and a former high school English teacher. She lives in Bozeman, Montana, where she and her family enjoy the mountain vistas.
Loading...
or
Not Currently Available for Direct Purchase