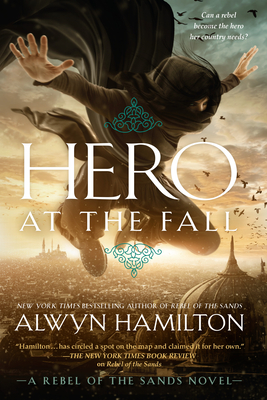 Hero at the Fall (Rebel of the Sands #3)

The breathless finale to the New York Times bestselling Rebel of the Sands series will have you on the edge of your seat until the dust from the final battle clears!

When gunslinging Amani Al'Hiza escaped her dead-end town, she never imagined she'd join a revolution, let alone lead one. But after the bloodthirsty Sultan of Miraji imprisoned the Rebel Prince Ahmed in the mythical city of Eremot, she doesn't have a choice. Armed with only her revolver, her wits, and her untameable Demdji powers, Amani must rally her skeleton crew of rebels for a rescue mission through the unforgiving desert to a place that, according to maps, doesn't exist. As she watches those she loves most lay their lives on the line against ghouls and enemy soldiers, Amani questions whether she can be the leader they need or if she is leading them all to their deaths.

Praise For Hero at the Fall (Rebel of the Sands #3)…

Praise for the Rebel of the Sands series:

“A winning bit of storytelling . . . Hamilton . . . has circled a spot on the map and claimed it for her own.”—New York Times Book Review on Rebel

”Readers will be drawn into the story and won't want to put this book down.” School Library Connections starred review of Rebel

“A bright and bold fantasy.”—USA Today’s Happy Ever After on Rebel

“Vivid, romantic, and wildly entertaining. You will cheer for Amani the whole way.”—Rae Carson, bestselling author of the Fire & Thorns trilogy

[if space, here are more—if not, these are optional to include:]
“Hamilton creates a robust mixture of gritty reality and fantasy, delivering a satisfying beginning to what promises to be an electrifying series.”—BookPage on Rebel

“A perfect combination of American Westerns and Arabian myths . . . Fans of Sarah Maas and Victoria Aveyard should give this one a try.”—VOYA on Rebel

“Strong and exciting . . . full of compelling twists and turns, and the ending will leave readers highly anticipating the final volume.”—Booklist on Traitor

“A robust and satisfying sequel, Traitor to the Throne ranks at the top with the novels of Morgan Rhodes, Rae Carson, and Leigh Bardugo.”—VOYA on Traitor

“Engrossing . . . join the ranks of those eagerly awaiting the next novel.”—BCCB on Traitor

Alwyn Hamilton was born in Toronto and lived between Canada, France, and Italy until the was three, when her family settled in the small French town of Beaune. She studied History of Art at King's College, Cambridge, graduated in 2009, and lives in London.
Loading...
or
Not Currently Available for Direct Purchase