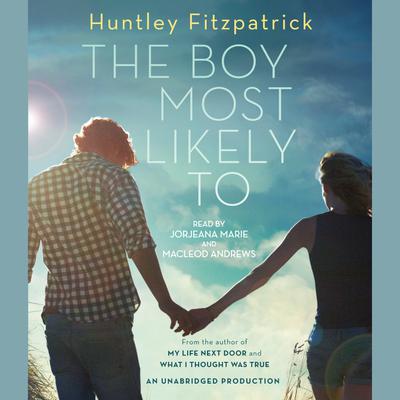 The Boy Most Likely To (Digital Audiobook)

The romantic companion to My Life Next Door—great for fans of Sarah Dessen and Jenny Han.

Tim Mason was The Boy Most Likely To find the liquor cabinet blindfolded, need a liver transplant, and drive his car into a house

Alice Garrett was The Girl Most Likely To . . . well, not date her little brother’s baggage-burdened best friend, for starters.

For Tim, it wouldn’t be smart to fall for Alice. For Alice, nothing could be scarier than falling for Tim. But Tim has never been known for making the smart choice, and Alice is starting to wonder if the “smart” choice is always the right one. When these two crash into each other, they crash hard.

Told in Tim’s and Alice’s distinctive, disarming, entirely compelling voices, this novel is for readers of The Spectacular Now, Nick and Norah’s Infinite Playlist, and Paper Towns.

Huntley Fitzpatrick always wanted to be a writer, ever since growing up in a small coastal Connecticut town much like those in My Life Next Door, What I Thought I Was True, and The Boy Most Likely To. After college she worked in many fields, including academic publishing and as an editor at Harlequin. Huntley is currently a full-time writer and mom to six children. She lives in coastal Massachusetts.