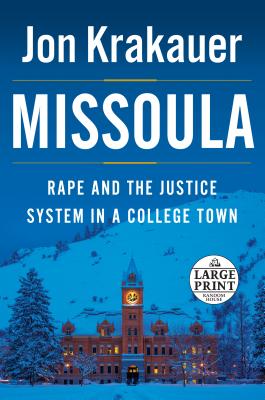 "[H]arrowing.... [I]ncisive.... Krakauer's investigation will succeed in altering the conversation around sexual violence.... Missoula will undoubtedly fortify those of us who have already broken our silence and may rally those who have not dared to.”
— Los Angeles Times

"Excellent.... Krakauer doesn't just tell the story of these crimes. As he has done so brilliantly in his other books...he sets the story firmly in the context of social history."
— Boston Globe

“[A] narrative nonfiction page-turner.... Missoula demonstrates that it’s not only possible but advantageous for reporters to remain clear-eye while also taking victims’ concerns into account. Krakauer skillfully strengthens his sources’ recollections without taking away their agency. He doesn’t hide from complexity or nuance.”
— Katie Baker, BuzzFeed

"[E]xpertly researched.... Equal parts riveting and horrifying, it's a hell of a read--and a necessary one."
— People

“[M]eticulously reported, fascinating and deeply disturbing.... By probing the specific, Krakauer illuminates upsetting generalities..... Krakauer—a journalist who is also a compelling writer—artfully keeps the books from becoming a compendium of facts..... It’s an important, difficult and timely subject.”
— USA Today

“A good and needed thing.... [P]owerful.... Krakauer tells a sad an infuriating story.... Krakauer has done a great service by taking on this subject.”
— Newsweek

“[A] case study of the widespread problem of campus rape.... For anyone distressed by the high rate of sexual assault afflicting young woman, and who wants to understand some of the ways in which the justice system fails them—and shouldn’t that be all of us?—Krakauer’s book is worth reading.”
— Time

"[A] devestating exposé of colleges and local law enforcement when it comes to investigating and prosecuting campus sex crimes.... [A] substantive deep dive into the morass of campus sex crimes, where the victim is too often treated like the accused."
— Entertainment Weekly

“[S]crupulously reported... The depth of [Krakauer’s] reporting...illustrates just how difficult it can be for victims to get justice.”
— Salon

"[R]elentless, exhaustive.... Krakauer does not pretend to be scooping anyone. Instead, he systematically details the many myths surrounding rape and the many ways in which our society mistreats victims long after the actual assault."
— Outside

"[A]n impassioned study of campus rape.... Krakauer’s evocative reporting, honed to a fine edge of anger, vividly conveys the ordeal of victims and their ongoing psychological dislocations. The result is a hard-hitting true-crime expose that looks underneath the he-said-she-said to get at the sexist assumptions that help cover up and enable these crimes.”
— Publishers Weekly (Starred Review)


“Jon Krakauer combines the tenacity and courage of the finest tradition of investigative journalism with the stylish subtlety and profound insight of the born writer.” —American Academy of Arts and Letters Award in Literature citation
Loading...
or
Not Currently Available for Direct Purchase