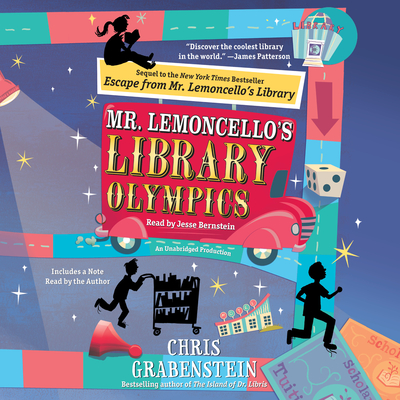 The New York Times bestselling, puzzle-packed sequel to the award-winning Escape from Mr. Lemoncello’s Library by Chris Grabenstein, coauthor of I Funny, Treasure Hunters and other bestselling series with James Patterson!

Welcome, boys and girls, readers of all ages, to the first-ever Library Olympics! Kyle and his teammates are back, and the world-famous game maker Luigi Lemoncello is at it again!

This time Mr. Lemoncello has invited teams from all across America to compete in the first-ever LIBRARY OLYMPICS. But something suspicious is going on . . . books are missing from Mr. Lemoncello’s library. Is someone trying to censor what the kids are reading?! Now it’s not just a game—can Mr. Lemoncello find the real defenders of books and champions of libraries? In between figuring out mind-boggling challenges, the kids will have to band together to get to the bottom of this mystery.

Packed with puzzles, clues, and thrilling surprises, this is a deliciously fun, action-packed sequel to the New York Times bestselling Escape from Mr. Lemoncello’s Library. Let the games begin!

“Discover the coolest library in the world.” —JAMES PATTERSON

“This sequel is just as much of an adventure as the first entry. Lots of action and quirky humor will lead kids to do just what libraries encourage them to do: keep reading.” —The Washington Post

“This action-packed sequel is sure to delight. Another winning love letter to libraries and librarians that is sure to leave readers looking at their own library in a new light.” —Booklist

“Dewey like this? Of course, and so will upper-elementary and middle school readers and gamers alike.” —Kirkus Reviews

CHRIS GRABENSTEIN is the New York Times bestselling author of the wildly popular Mr. Lemoncello series,  the Welcome to Wonderland series, and many other books, as well as the coauthor of many page-turners with James Patterson, including the Max Einstein series; and of Shine!, which he coauthored with his wife, J.J. Grabenstein. Chris lives in New York City. Visit Chris at ChrisGrabenstein.com and on Twitter at @CGrabenstein. Look for the latest Mr. Lemoncello books-Mr. Lemoncello's All-Star Breakout Game (available now!) and Mr. Lemoncello and the Titanium Ticket, coming in 2020!
Loading...
or
Not Currently Available for Direct Purchase