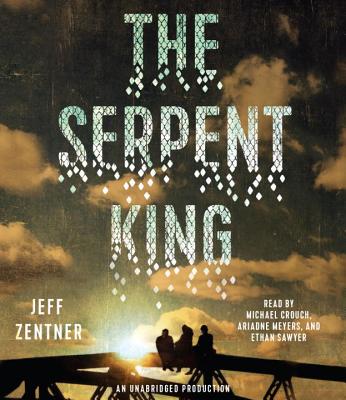 “The Serpent King is a book you won’t be able to resist or forget. The Southern boy in me savored every syllable and the reader in me fell in love with every page.” —John Corey Whaley, National Book Award finalist and Printz Award winner

Dill has had to wrestle with vipers his whole life—at home, as the only son of a Pentecostal minister who urges him to handle poisonous rattlesnakes, and at school, where he faces down bullies who target him for his father’s extreme faith and very public fall from grace.

He and his fellow outcast friends must try to make it through their senior year of high school without letting the small-town culture destroy their creative spirits and sense of self. Graduation will lead to new beginnings for Lydia, whose edgy fashion blog is her ticket out of their rural Tennessee town. And Travis is content where he is thanks to his obsession with an epic book series and the fangirl turning his reality into real-life fantasy.

Their diverging paths could mean the end of their friendship. But not before Dill confronts his dark legacy to attempt to find a way into the light of a future worth living.

Includes the song “Birds Fly South,” performed by the author and Elin Palmer.

Praise for The Serpent King:
"Zentner combines the melancholy of being 17 with the melancholy present in the best of Southern fiction and gives us a novel that will fill the infinite space that was left in your chest after you finished The Perks of Being a Wallflower." -- BookRiot

"The Serpent King gripped me in its coils and kept me turning pages late into the night. A triumph of love and dignity."--Stephanie Perkins, New York Times bestselling author

Praise For The Serpent King…

"A book you won't be able to resist or forget. The Southern boy in me savored every syllable and the reader in me fell in love with every page." –John Corey Whaley, National Book Award finalist and Printz Award winner

"Move over, John Green; Zentner is coming for you." –The New York Public Library

"Will fill the infinite space that was left in your chest after you finished The Perks of Being a Wallflower." –BookRiot.com

"A story about friendship, family and forgiveness, it's as funny and witty as it is utterly heartbreaking." –PasteMagazine.com

"A brutally honest portrayal of teen life . . . [and] a love letter to the South from a man who really understands it." –Mashable.com

"I adored all three of these characters and the way they talked to and loved one another." –New York Times Book Review

"[T]his sepia-toned portrait of small-town life serves as a moving testament to love, loyalty, faith, and reaching through the darkness to find light and hope." –PW, Starred

"Pens would run dry if readers were to underline extraordinary sentences--the kind that are so true, or funny, or beautiful that they clamp hearts. . . . [An] extraordinary YA debut." –Shelf Awareness, Starred

"The third-person narration manages to convey distinct flavor for each deeply personal and introspective storyline, so each character emerges as an authentic individual, flawed yet lovable, and readers will find themselves drawn by the heartstrings into their complex lives." –The Bulletin, Starred

"Thorough characterization and artful prose allow readers to intimately experience the highs and lows of these three friends .... Recommended for fans of John Green and Rainbow Rowell." –SLJ

Before becoming a writer, JEFF ZENTNER was a singer-songwriter and guitarist who recorded with Iggy Pop, Nick Cave, and Debbie Harry. He lives in Nashville with his wife and son. Committed to making creativity a part of his everyday life, Zentner wrote both his debut novel, The Serpent King, and his follow-up book, Goodbye Days, on his iPhone while taking the bus to and from work. You can follow Zentner on Facebook, on Instagram, and on Twitter at @jeffzentner.
Loading...
or
Not Currently Available for Direct Purchase